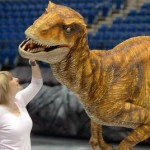 I, like many others, did not grow up in the age when dinosaurs roamed the earth. However, I was that kid who owned packets upon packets of cheap-o plastic, made-in-China dinosaur toys, the kind you find as pinata stuffers. I had a gaudy, neon-yellow, velcroed wallet that I carried around for the sheer fact it had a blue Tyrannosaurus Rex on it. I knew all the dino names as a 4 year old, could spell Pteranodan, Diplodocus, Ankylosaurus, Ichthyosaur, Rhamphorhynchus, Dimetrodon, Plesiosaur and others even better than I can spell Schwarzenegger today. I was contending the differences between Deinonychus and Velociraptor before even the Jurassic Park movie had come out and rendered nerdy speculation irrelevant. I thought the fabled Ultrasaurus was “da shee-yut” as we said in the ’90s (well, not me personally since I was a dinosaur nerd) and stood audience to the naming dispute regarding the biggest dinosaur who ever lived…. I also had a pink shirt with a brontosaurus on it. In darkness, the shirt depicted a dino skeleton that lit up ever so dimly in glowing yellow paint, but was awesome nonetheless.

The point is: you don’t have to be a little dino-freak like I was/am to appreciate the coolness to be found from the superb puppetry/animatronics in “Walking With Dinosaurs – The Arena Spectacular”, the new gold standard for reviving our fossilized predecessors. Short of getting John Hammond to dig up some ancient mosquitos from amber, this is as real as it gets. My fingers are crossed that they make their way to the United States, San Antonio specifically. It has my money already, Walking With Dinosaurs just needs to name a price.

Edit: I went to the show November 2014 in Austin, TX; it was freakin’ awesome. The fluidity of the animatronics was unmatched with anything I’ve seen before and the scale of it all was outstanding/daunting. The “combat” betwixt thunder-lizards left a little to be desired, but at a 1 and 1/2 hours show where even the stage transformed to suit the mood, I was very impressed. Photos will be forthcoming in my Portfolio section! 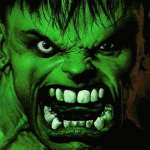 The green guy was uncontrollable and then 5 minutes later he was a humorous team player? How the hell?