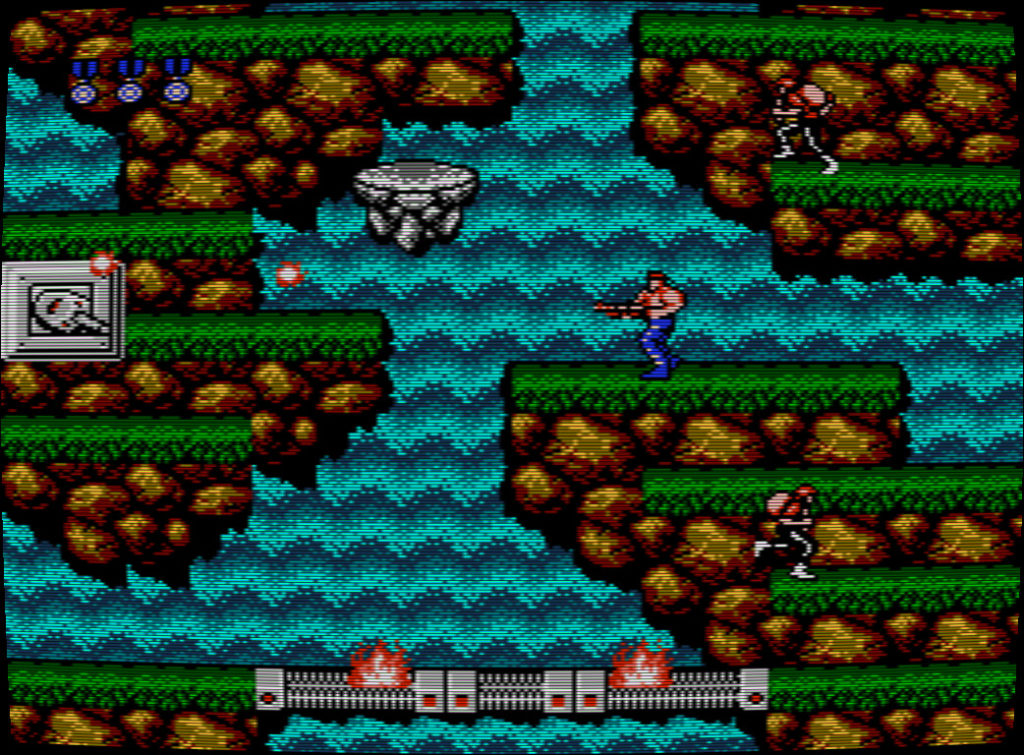 Comparable To: a more forgiving and mobile Rush’n Attack, better art direction and music than Super Contra, more straightforward and action-packed than Contra Force, more stable than Ikari Warriors, less frustrating and better hit detection than TMNT, easier than Ninja Gaiden or Empire Strikes back, and Contra is the grandpappy of Metal Slug.

Learning Curve: How quickly can you memorize two buttons?
Game Length: 30 minutes
Difficulty: Easier than you remember but it’s scattered with cheap, pop-in ambushes.
Mastery: There aren’t secret items, extra modes, or hidden frills – there is only the bliss and excitement of beating the game solo or with a friend as quickly as possible.

Story: Progressing from the “Predator” backdrop of dense jungles to the modern industrial sprawl of “Bladerunner”/”Robocop” and ending in the reclusive, living lair of the “Aliens” franchise is more a tour of American cinematic blockbusters in the early 80s than a coherent plotline. Still, what motivations for spraying glowing death orbs would you need? I’d argue that it’s a perfectly acceptable time capsule of borrowed art that leaves its players unintentionally and sufficiently nostalgic in a 21st century expedition into the 8 bit era.

But don’t let that preclude you from knowing that the protagonists with the primary-colored trousers are Bill “Mad Dog” Rizer and Lance “Scorpion” Bean, elite guerillas sent by the Earth Marine Corp to destroy the Red Falcon Organization, whose human forces became henchman for an unknown alien evil from beyond. Whether or not this game’s proceedings take place in 1987’s Amazon basin or in 2633’s New Zealand archipelago depends solely on which country’s manual you prefer, though no one can dispute the awesomeness of Level 8’s official description:

“Red Falcon, I’d like you to meet one hot shot commando. Hot Shot commando, meet Red Falcon. The unpleasantry is mutual. I’m sure since you must blast alien larvae, alien guts, and finally the alien’s heart to save the earth.” 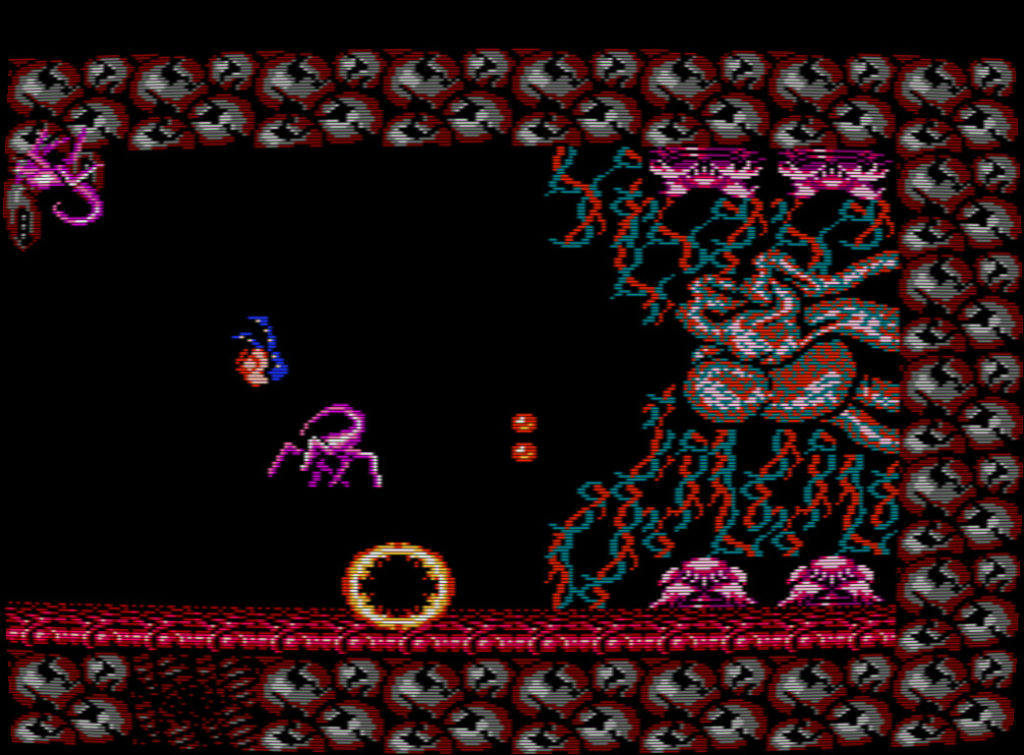 Without the Konami code just bend over and kiss your ass goodbye.

Presentation: This is how I remember the NES in its heyday: brightly saturated colors, distinguishable sprites flitting about a screen inundated in projectiles which occasionally brought performance to a stutter. Bold musical scores and riffs composed of MIDI bleats and blats amazingly capture the essence of this and other games, possibly the most iconic and recognizable bits among the palette which players had so much exposure to. And since you’d defiantly reboot the same level ad nauseam until you’d bested the beastie (and invite friends to bear witness to your triumphs) the familiarity of these sights and sounds of erupting pixels and audible trills all cemented themselves firmly into many minds of my generation.

The licks of flame, swarms of human/alien aggressors, flares of careless bullet sprays, and the undulating brightness of smoldering wreckage and organic map tilesets are just as perceptible to my mind’s eye when I’m not experiencing them. And because each musical track perfectly sets the literal stage for a theme of urgency, intrigue, adventurousness, or achievement, the presentation of Contra is an utter joy.

Unique Features: Games have always emulated popular movies but most games didn’t routinely give you a damned superweapon that cleared the screen with ease. The Spread Gun is a favorite overpowered armament of mine – up there with Doom’s BFG 9000, Turok’s Cerebral Bore, and the Gravity Gun from Half Life 2. It’s just old fashioned fun. 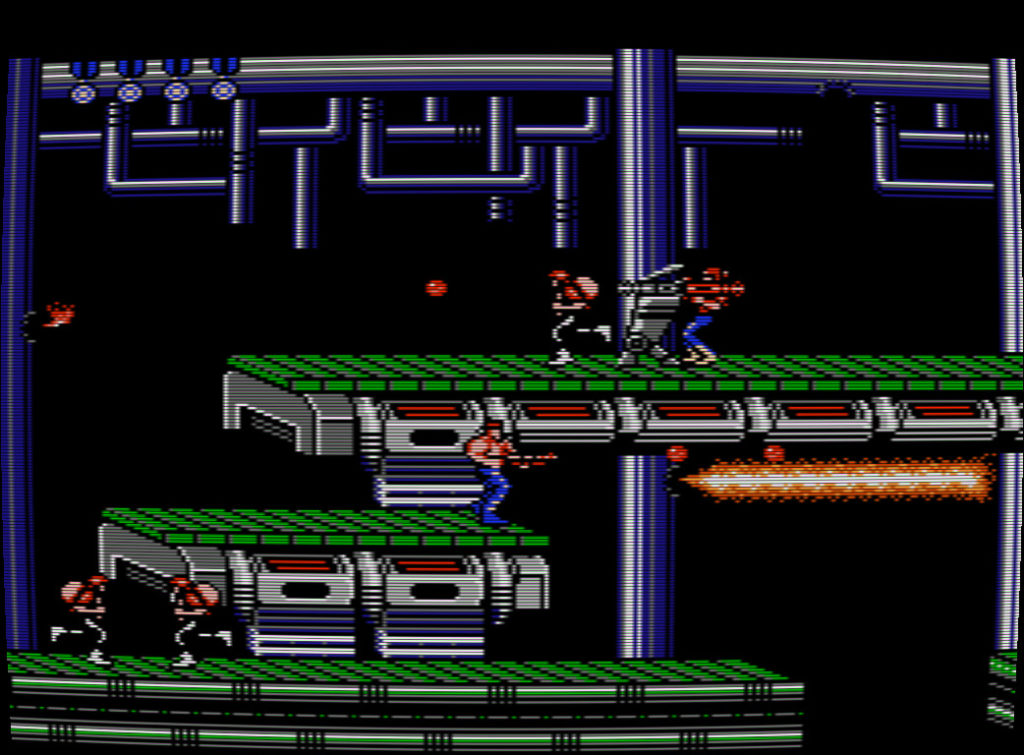 We loved our black void, vaguely-futuristic, industrial platformers in the 80s.

Gameplay: Shoot anything that moves. Chances are, it’s about to send a slow-moving dot your direction, open a door, or represent the boss’s glowing weak spot.

Due to the teeming forces that engulf the screen from all angles, your job as a bouncing mad man stuck in a perpetual somersault is to blast a path forward, preferably while running to the right. (Or “up” on the 3D levels where the tunnel bulkheads must be deconstructed like a puzzle.) On top of static, predictable enemy encampments such as turrets, Contra has forces literally raining from the trees, emerging from the underbrush, and careening headlong into the character at random in a bid to one touch kill when a grid of mobile projectiles isn’t already considered overkill.

Characters respawn by dropping in from the top-left and neither the music nor the action skips a beat, meaning saved patience and speedier re-attempts at surpassing the various kill zones. In this fashion, your three starting lives operate more like cells on a health meter before the universal “Continue?” screen emerges and you must start from the stage’s intro card. Each archetypal level is capped off with larger-than-life malicious machines or biomechanical plasma hologram projections (?), all of which cast bubbles, birdman underlings, fireballs, or purple facehuggers, all in some semblance of a pattern that accelerates as the boss gets closer to death. Thwart eight planes of fodder and the Red Falcon Organization’s island explodes, reduced to a pulsing coal as our heroes (and their flamboyant leggings) evacuate in ‘da choppa’.

Additional Comments: Despite the Machine Gun and Spread Gun being the only respectable power-ups of seven, the game still feels exciting when a flying capsule drunkenly veers on-screen and the players fight over who gets the honor of avoiding the “F” and “L” weapons and who accidentally touches them. 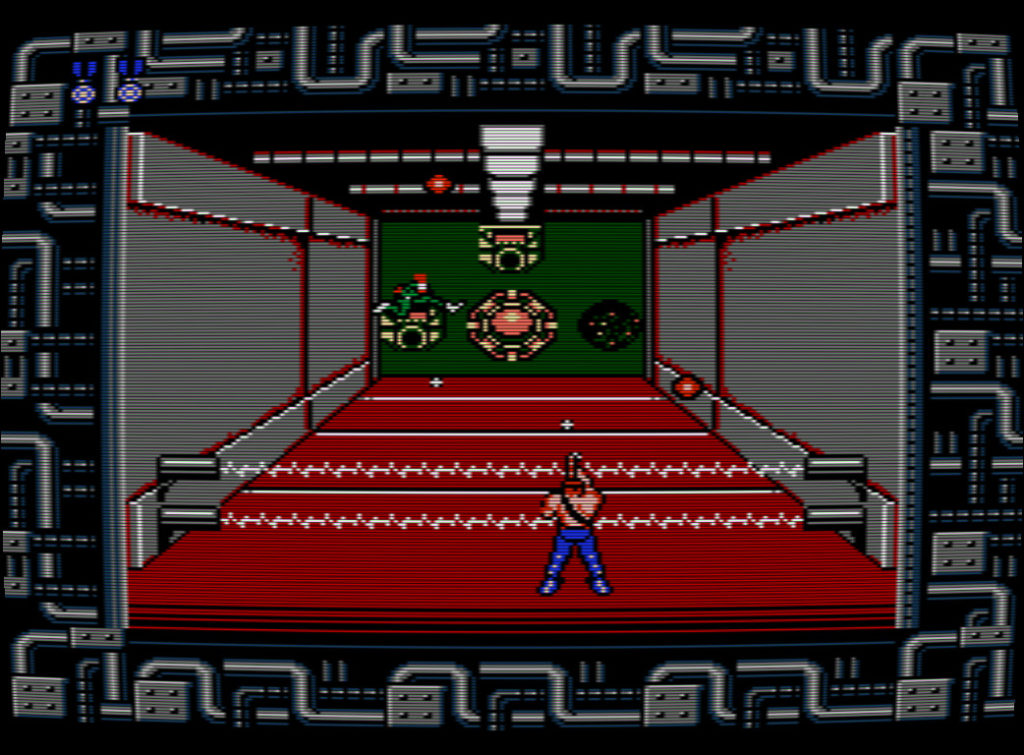 Weak points must be flashy and red. That’s just Engineering 101.

What I Liked: Above all else, the musical pieces are what I recall most fondly and it’s a wonder each is more distinctive than the last, condensing and endorsing a particular mood. The ‘tap tap tap’ of the commando’s footsteps between cordons -set to Level 2’s riveting music as you pass through each section- finally fades to black and gives way to the wall o’ bosses spewing a descending throng of foes. The pitch shifts; the beat accelerates. That transition from “fuck yeah, let’s get ’em” to an audible player scream as you dodge and weave in desperation is a sacred memory I have of Contra.

I like the art direction, the visual audacity, the degree of challenge, and the game’s brevity.

What I Disliked: The Laser. Unlike the corkscrew weapon in Fester’s Quest, the Fireball’s arching diameter is small enough to be usable whereas the laser cheapens its own effectiveness by negating previous shots upon a new button press. I should be able to act as a mobile rave, spewing multiple bolts of white hot death!

Glitches Experienced: Contra is no exception to the blinking sprites, framerate, and bitmap issues of other cartridges though they seem exceptionally less frequent here.

My Personal Reaction: Contra is one of the best of this era – almost universally known, reasonably balanced, and refreshingly simple. Play sessions are quick to start and accessible even if the participants bore quickly or, conversely, can beat it in a half hour. 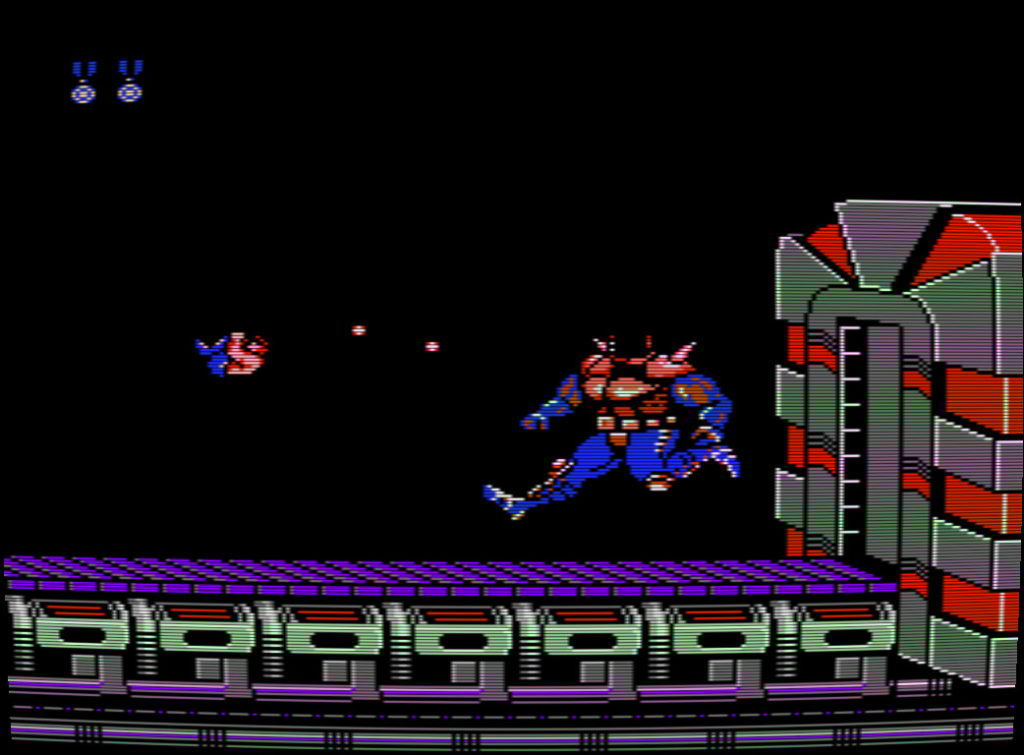 Wouldn’t be an NES boss if the human wasn’t 5x your height and dressed like a Gwar fan playing roller hockey.

You’ll probably want this 50 lives code until you memorize the levels.
Before the title music ends:
Up, Up, Down, Down, Left, Right, Left, Right, B, A, Select, Start

Depth and Replayability: No depth, Extremely High replayability.
I frequently boot Contra up and crank out a playthrough in 30 minutes.

Suggested Value: $5, $25 for a physical cartridge 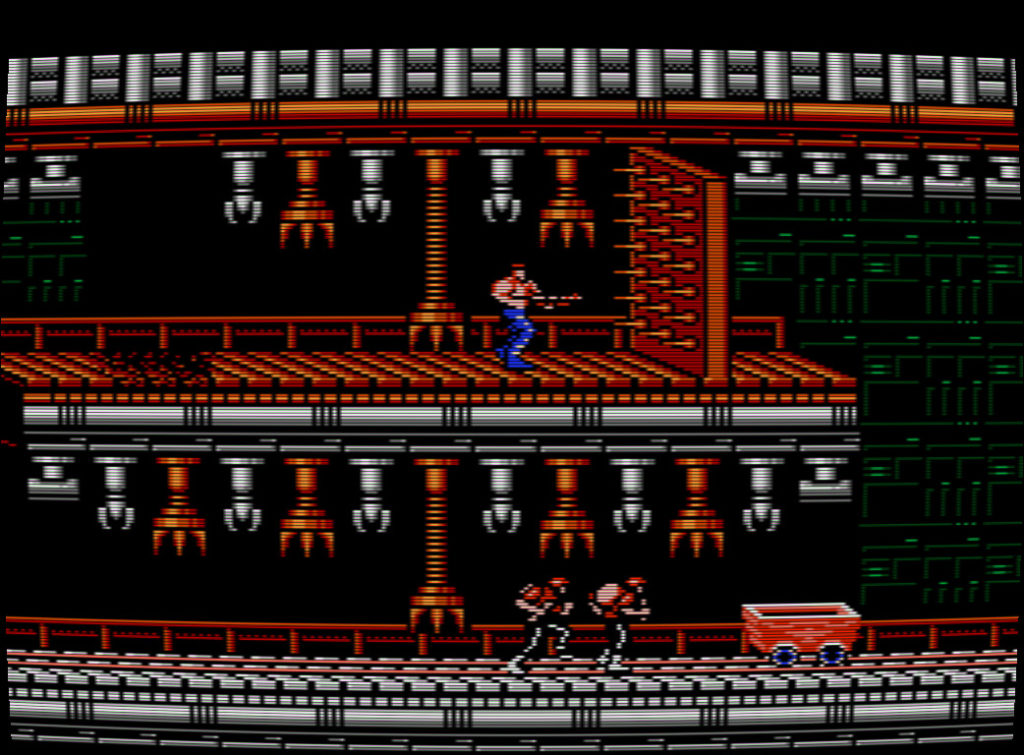 Just wait until Contra gets its hooks in you.