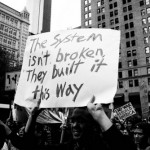 You and I will either hear about, get used by, or participate in these broken-ass systems on a daily basis. Most are subtle, while others are just so stupid/trivial that we’ve never really put much thought into them. Well, I DID! Although I didn’t write paragraphs about shit like the hap-hazard inconsistencies in English pronunciation or the remaining Blue Laws (or even anything remotely important for that matter), I’ve cobbled a decent list of incongruent annoyances about mundane life, as well as some wide-scale troubles that should probably be addressed. They actually make me mad the more I think about them…. so, in no particular order, I bring you 10 (and a half) RIDICULOUS SYSTEMS:

1. Imperial Measurements
This aspect of human existence has been screwed for quite a while. Imperial Measurement is not an inherent “language” to our culture, with a complex string of grammatical rules and associations that would unravel our very world if we decided to stop using it. But our nation blows a gasket as if it was. Measurements are just labels, specific names for lengths, volumes, and weights. And in that sense, Metric is just flat-out superior with easy conversion ratios and non-arbitrary naming conventions. A “mile” is what? I forget. 5300 feet? Each equaling 12 inches. What, MY foot? Oh no no. My foot measures like 9/10 of a “Standard” foot…. Now, here’s Metric. (I don’t even USE it everyday, but I remember it.) A kilometer is 1000 meters (kilo means 1000). A meter can be divided into ten decimeters (deci means 1/10th), which can then be divided into 10 centimeters which can be divided into 10 millimeters. But if the United States gives in, the Europeans “win the war” right? Fuck this ease/efficiency, amirite?

2. Daylight Savings
Whose daylight are we saving, exactly? I still have the same amount. You’d think that moving to the Equator would be the ultimate form of making damned sure it’s bright outside during your waking hours, but what good is an hour really doing us anyways? Regardless of where a person lives, daylight savings ensures that I’m groggy and late at least once from forgetting to reset that SINGLE device that I overlooked. Besides, I’m awake and active for 16 hours a day, meaning that much of my time is going to be spent in both dark and light periods regardless of what arbitrary time people say it is. We can’t do anything about summers having more light in the northern hemisphere, so why exactly are we screwing with my natural clock and processes?

2 1/2. Daytime vs. Night-time Businesses
Better yet, I have a solution that negates daylight savings, reduces pollution, and caters to more than just old folks making a Luby’s run. How about we stagger the standard office hours throughout the day? This wouldn’t apply to every business, of course, but many customer service industries, shops, and maintenance places are flexible enough to be open during later times. Instead of innovation, we get major gridlock during peak hours at 7-9 and from 4-6 ish, clouds of carbon monoxide belching into the atmosphere. This could be improved. I’m a night owl, and would gladly do the bulk of my shopping when the lines are reduced and it’s guaranteed that there won’t be traffic, or the chance that a nice restaurant won’t have an obnoxious family waiting ahead of me, sprawled out in the lobby. This is good for the economy. The general public doesn’t naturally wake up at the crack of dawn anyways! Many would jump at the chance to commute later in the day, not to stumble in to school/work first thing in the morning.

3. QWERTY Keyboard
Originally a typewriter arrangement that reduced the likelihood of the metal bars getting tangled, the QWERTY keyboard is a relic that is here to stay. (Can you imagine changing it?) The most common letters according to Wheel of Fortune (R, S, T, L, N, E) are situated in a “Ying-Yang” fashion, with vertically-opposing placements that don’t mirror each other and are most reachable by pointer and ring fingers only. Furthermore, the vowels aren’t even grouped. I have to use my pinky for an A? A fucking A? U, I, and O are all hanging out at the top-right; E is even in the top row, but A is shoved down in the keyboard’s armpit! Want another shitty typing system? The repetitive ten-key touch used by early cell phones and the Playstation Network. Why should I have to cycle forwards through 9 types of punctuation to enter a number 1? God forbid I hit it one times too many…. Why Sony emulated an [old] phone pad is beyond me. Want another “ridic-useless” idea for computers in general? Make some kind of one-handed keyboard that has the lettered keys doubled up so I can type while using an optical mouse. 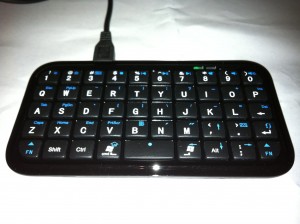 4. The Calendar
With Americans being so religious in the first place, I’m very surprised that Sunday doesn’t occur on the right of the gregorian calendar (symbolizing the 7th day of rest), but no matter. So 12 months with 28-31 random amount of days are the best we could do? And actual “dates” that we celebrate change throughout the year? (First Friday of “this” month, etc.) Instead, how about 73 weeks of 5 days each (discluding leap year)? Five is a much easier number to multiply and if you had one day off a “week”, that would approximate the 2:7 work ratio that we currently have. Or maybe divide up the days into better month designations so that you don’t have to recall a gradeschool limerick to plan out your vacation? This is all a stretch, true, but we could at least adopt the graduating “day:month:year” format instead of “month:day:year”, which can become super-confusing in numerical form. See ya on 12/11/2013, or is it 11/12/2013?!

5. Clothing Sizes
I understand the implication of different “cuts” of clothing for the sexes, (wider hips, broader shoulders, etc.) but ultimately, I think that the present brand-specific clothing fitting system is screwed in addition to the gender-size disparity not being very large. I’ve had good experiences trying to find a new pair of Levi’s jeans (I mean, if you know your literal leg length and appreciate Boot Cut, you’ll be accomodated) but God forbid I want to find a shirt that fits me. A “Small” is not a Small across the board, resulting in varying shoulder widths, varying shirt lengths, and varying cloth durabilities that either shrink when you wash them or stretch after a month of wear. Shoes aren’t much better. I’ve got a narrow foot with a high arch; good luck finding the proper amount of padding in the right place with a “natural” tip design that doesn’t break my pinky toe. On top of all that, Women have negative sizes? Fuck me. It’s time to revamp the system to be more informative. Focus less on vanity and more on telling the customer exactly what they’re getting, even between brands. I think I’ve wasted enough time in the dressing room.

6. Processing and Other Fees
I’m looking at YOU government-owned services and utility companies. “Processing fees”. Jesus. If you want to charge me more money, just tack it on to the main total and advertise as such. Don’t pretend like the 30 seconds it takes for a clerk to type my name and phone number into an automated software is worth the 30 dollar charge. Same goes for transaction and transference fees. It’s digital, God damn it, traveling at near the speed of light…. by unpaid machines no less. Just “Lump Sum”, me. These fees just decrease my faith in your honesty. Would you rather that than have me believe that you’re the pinnacle of inefficiency? On top of that, it sucks that these systems/processes are becoming ever more streamlined for reduced overhead, yet the customer is continuously billed at that amount or greater, equating in higher profit margins….

7. Raw Automotive Power
How High does your speedometer go? 88mph? 120mph? 220mph? Now how fast can you LEGALLY travel in your roaring 6 cylinder, which harnesses millions of tiny explosions to propel your feather-weight car down that boring, flat stretch of road between cities? Why is the disparity so large? Why must they make vehicles that want to blaze a trail down highways while simultaneously making it illegal to do so. Now if I was a conspiracy theorist, I’d suggest some crazy bullshit like the Police WANT you to go fast – It’s a great way to earn some extra revenue and is easy to induce if you space the signs apart, coupled with inane limit dips in spontaneous chunks of road…. In reality though, the answer is probably that the manufacturers have Politics in their pocket, and have American complacency on their side. For the record though, tweaking a car’s computer to inhibit illegal speeds would be a cakewalk. Acceleration too, for that matter. 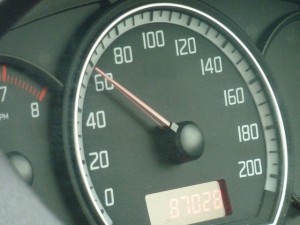 8. Tipping/Gratuity
What a way to circumvent the minimum wage laws! *patronizing slow clap* Like Mr. Pink, I’ve got several beefs with this setup. For starters: Many trainee waiters don’t get to keep their initial tips. Society guilts us and if we don’t pay these wages directly, we suddenly become assholes. The accepted percentage is difficult to calculate.  Sometimes the tips are pooled and split evenly between the employees, negating the whole point of tipping for a specific person’s good service. You must also report your tips as income, even though it should be considered free fucking money. Restaurants sometimes hide the fact that an automated gratuity is tacked onto the bill. And lastly, very few OTHER occupations have us TIP EMPLOYEES TO DO THEIR JOB…. I’m not going to argue about how difficult being a waiter is, but I’ve had some demanding employment as a Lot Attendant, Camp Counselor, and Stock Manager with zero bonuses. One last example? In extreme scenarios, delivery drivers can even make more in a night than managers. (I don’t contest this, but it’s obviously not intended.)

9. Paper Manuals
Nobody reads Manuals. Nobody. The only time I ever hear about people even opening a paper manual is when they are frantically flipping through the pages in an attempt to support a product (or need reading material for the toilet). Oh, the customer undoubtedly has one too, but it’s up to the paid representative to *gasp* actually read it. Online components would drastically cut down on this waste of paper, especially since these novellettes are written in like 10 languages. Besides, you can CTRL+F a digital document and browse it with ease! My grandmother would print out digital manuals for legibility reasons, but at least she made it her own prerogative (she never read them either). Licensing Agreements are still the most unread document in our history but at least they tend to be digital, and don’t make me guiltily throw away 1/8th of the rainforest each time. Instructional Pictures/Diagrams, conversely, are awesome.

10. Economic Success Indicators
For many years, the Dow Jones Industrial and other lesser-known charts and averages have been reported and cited as if they had much to do with America’s economic well-being. In addition to not being representative of “Industrial” companies by a long shot, and in addition to the controversial weighting discrepancies in the adjustment of stock pricing averages within the report, using these numbers as a direct indicator of success is fallacious. The “Top 30” companies hardly represent the whole, now do they? I just wish it was more apparent that people’s “faith” in our economy heavily impacts on how it actually runs, though these superficial reporting methods influence the outcome without directly describing it. On that same note, the crazy fluctuations present in the stock market aren’t a true test of our economic health either, but rather the daily “scores” of a MMORMG (massively monetized oligarchical rich-man’s game) as they attempt to subjugate the corporate structure for personal gain. It’s bigger than WOW actually.

1 thought on “Ridic-Useless Systems that We Haven’t Replaced”