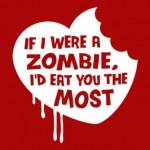 It would be easy to hear a brief paraphrasing of this movie and assume it was part of the deservedly-abhorred Twilight saga, only with zombies instead of angsty vamp-wolves. And in all honesty the plot isn’t that far off. Though that idea could very well be how this was pitched to a producer, the movie turns out to be anything but. With equal helpings of comedy, romance, and horror, Warm Bodies tells the classic story of boy becomes zombie, boy meets girl, boy eats girl’s boyfriend, boy falls in love with girl, girl stabs boy in the chest and runs away screaming. In short, you’ll be blindsided if you see this thing with any kind of preconceptions, Twilight or not.

As mentioned, you won’t be exactly sure what you’re getting by trailer or title alone. It has scares, cheesy adulation, and laugh-out-loud humor bits, but it never truly commits to any one approach. That may even be the biggest strength of this picture: the inability to be classified. Rather it’s a hodge-podge of genres and induces the full range of our emotional capabilities while blending them all quite well. There doesn’t seem to be a useless scene actually, as each is important to conveying a bit of the narrative, a joke, adding tension, or just generally doing what a good story does. The biggest surprise however could be that this is a wholly positive and UPLIFTING movie, one that celebrates the human condition just as much as it enjoys the blood-feud dichotomy between us and our mythical undead masses.

Because the movie has many elements that appeal directly to different crowds there are, indeed, parts that I did not enjoy (despite recognizing their necessity). The teen-romance themes, in particular, were a bit off-putting though it’s worth mentioning that it was all done in a tongue-in-cheek manner that bordered more on self-parody or even a nostalgic throw-back to chick flicks of yore. A balcony reproduction from Romeo and Juliet had me groaning and focusing on the popcorn in my face, but before it dragged on too long we were shuttled off to a very funny interrogation/makeover sequence that lampooned both the agelessness of the male lead and ridiculed 80’s montages. Think the original Not Another Teen Movie but played a straighter in that it ridicules a trope while actively embracing it. The film certainly knows its strengths and stuck to them judiciously without ever boxing creativity in a corner. Luckily, Warm Bodies knows better than to take itself too seriously.

And that’s a good thing too since most of the flimsy constructs of this world’s rules are best not pondered. I needed both hands to count the IMMEDIATE number of impossible improbabilities but the ridiculous romp was enjoyable despite the blasphemies to science. Even though John Malkovich plays the closed-minded military leader, the cast has a knack for sweeping the viewer away from facts and has us focusing on what the plot wants us to feel. There is certainly a message here and although the most cynical of us will remain unaffected, it is approached in a fun and near-whimsical way without ever really rubbing our noses in it through pacing most excellent. That is probably the point of the film actually: to get us to Feel Something. The central idea of humanity’s struggle to survive, armageddon included, would be desecrated if we didn’t retain the compassion to share an umbrella with our inept zombie neighbor or to play a harmless game of catch with a stilted corpse….

With a ridiculous ending in a wasteland heavily-laden in metaphor, you could very well roll your eyes at the resolution of this story if simply told about it but the path in getting there seems very natural during the process as it gently slopes upwards from the base desire for grisly action to the eventual possibility of believing in zombie love (with even more grisly action). Rest assured, necrophilia is averted though I was always poised for cringing through several sequencies with which ickiness is flirted but not truly enacted upon. Despite the movie’s awkward, lurching gait, you may end up being swept off your feet because Warm Bodies hits its subject material in a fresh and enlightening way that may leave you thankful to be alive.

Check your brain at the door and get ready for some viscerally funny romance presented in a way that only apocalyptically comedic violence can deliver.