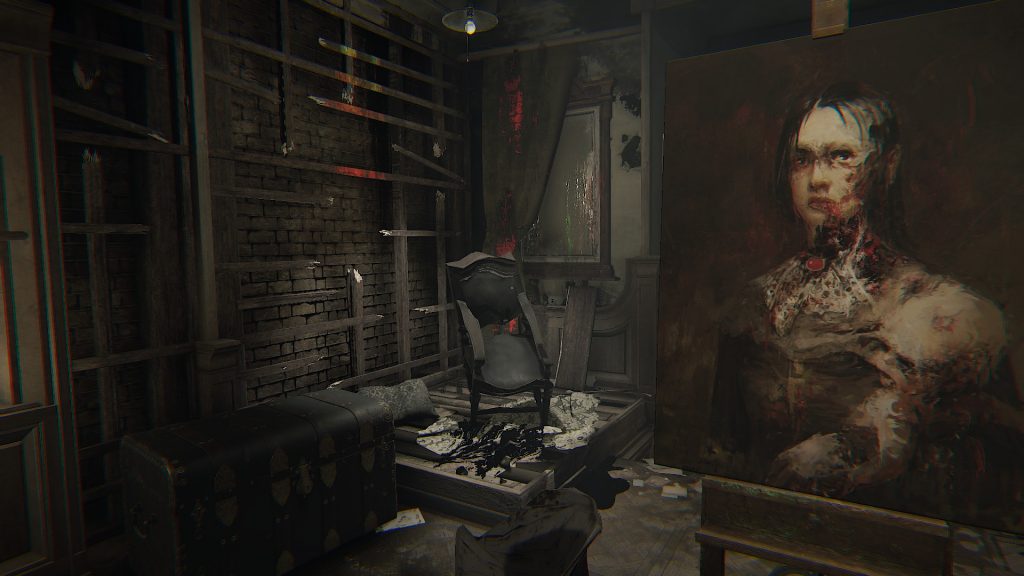 Comparable To: story and other time elements of Braid, Stanley Parable’s maze-like walking obsession and visual pratfalls (sans narration, which this game could have used); Layers of Fear resonates with Amnesia the Dark Descent except for its tension emanating solely from the environment. SOME DEVELOPER played through the Silent Hills hallway demo, for sure! Also SOMA’s dark, desolate shtick is present, though puzzles are absent. (Unless you count a 3 digit numerical lock or rewinding a phonograph to reverse time, which I do not.) 7th guest or 11th hour’s mansion anyone?

Learning Curve: n/a
Game Length: 3 hours
Difficulty: None unless gothic, pulsating growths under chromatic aberration filters cause your spine to become a column of writhing grubworms shrieking in protest.
Mastery: Since there are no skill or reflex-based elements, this becomes a question of observancy and dedication for collectible looting, or in seeing the three final endings.

Story: Since vague simplicity is the chosen format, there is only so much I can reveal. The player is treated to temporal and story-telling distortions that document a descent [or repeated immersion] into madness, centered around the ever-present facts that your limping drunkard avatar suffered great loss in his past. This artist’s “magnum opus” is just within reach though an indeterminate amount of disoriented hobbling throughout a mansion’s corrupted hallways dictates the outcome.

What is he painting? Will he finish it? Where do his priorities lay and do they align to the subtle guidance offered by the player? All that’s left to judge the proceeding blunders and lamentations are the occasional rat – but are even they real? 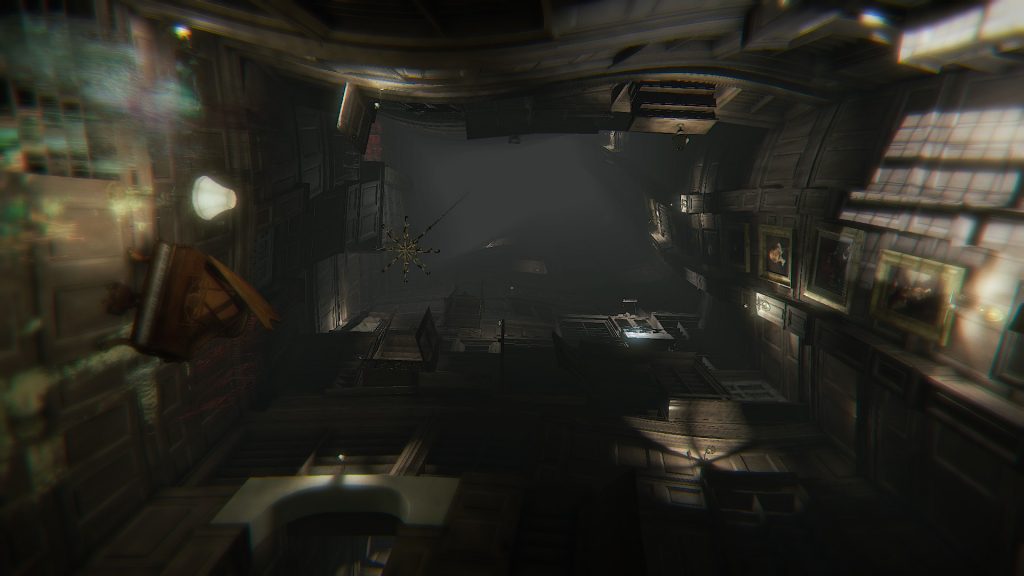 This adventure is quite the obstacle course for a dude with a bum leg.

Presentation: Arguably the strongest focus of the experience, Layers of Fear throws everything including the kitchen sink in a bid to impress the player with its robust texturing, lighting, and physics engine. Thing is: it works. Once the bounds of sanity are removed as a restraint, the setting really comes into its own and every twisting hallway, every machination of mental duress makes a visual manifestation that astounds and delights. Ceilings ascend, paintings tremble, rats scurry past contorting furniture, and halls drip wet with…. paint. Bottles fall untouched from their perch, plumbing busts loose from its moorings, and sofas trade the floor for a ceiling at the flick of a light switch. All to great effect.

It’s rendered in stunning detail – the normal maps, textures, and attention to scuffs, smudges, and striations, everything equating to top notch digital assets. Little nuances like mementos having fingerprints, wear spots, and scratches entice inspection while one of many mundane “mementos” are picked up and rotated in 360 degrees of space, the MC spilling misery in the form of a recanted history of why the object has significance. (The poor sod shuffles around his once-vibrant extravagance like some old ghost phasing through a past of poor, isolated choices.)

But I hope you’re okay with gory, grotesque, and disturbing imagery! That’s the modern take on “horror” after all. Half the time, you don’t know if it’s paint or viscera but it’s all the same in a world where art pieces come to life and your playable character fails to distinguish between something living and what he has created. Is it both? *gasp*

Unique Features: Clever use of distraction and off-screen rendering. It’s never safe to turn around.

Gameplay: From a mechanics standpoint, you’re invincible since nothing noticeably disrupts or effects gameplay to a significant degree. Regardless of the visual and conceptual danger, this stark fact is driven home time and again when the character emerges unscathed and without repercussion of charging headlong into a burning attic, a malicious ghost’s path, or when spelunking the very orifices of your mansion. Quite honestly, this is a poor system for encouraging/discouraging a desired response to stimuli, one that would have amplified the story-telling if only the player was nudged into embodying the character instead of pushing the boundaries of the environment through gags and gaffs. I wish it would have had elements of the darkness==madness dichotomy that Amnesia espoused, for example, but since walls are the sole course corrector, this experience was a true walking simulator in every meaning of the phrase.

Walking-slash-looting simulator, to give credit where credit is due. And by “looting” I mean 2% of every container you open has a paragraph of prose or a hasty rat sketch…. to appease the player(?). There’s not much to say: the asymmetrical gait of a tormented painter isn’t glorious to behold after all. Merely stroll into harm’s way for three hours, letting the nightmares and poltergeists assault you without any reactionary or defensive measures in place aside from the player’s very tolerance. With an air of detachment one is expected to inspect, look, gaze, peruse, stare, view, and glance about the art assets until it is clear that only collision geometry and empty cupboards remain in this particular room. Afterwards you behold, contemplate, gape, glare, leer, ogle, peek, peep, glimpse, glance, and gander in the next!

Doors disappear and crawlspaces materialize, yet the actual playthrough never matches the evocative and attention-capturing setting. Few and far between is the player ever presented with a challenge beyond “click on the obtuse trigger for exiting this room” and “look at the scary thing”. No, REALLY LOOK AT IT!

I’ll let these actual achievements speak for themselves:
Wanderer – Take 1000 Steps
Inspired OCD – Search 100 Drawers and Cabinets
Those Eyes Can Pierce a Man’s Soul – Look at the “Furboy” Painting for 5 Minutes.
Art Connoisseur – Gaze at Paintings for an Hour Total 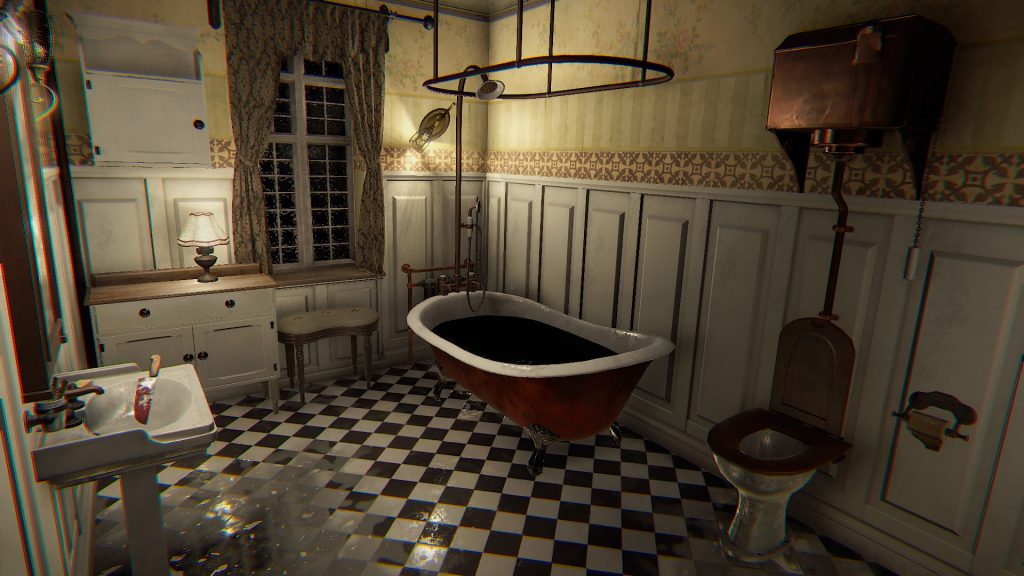 Whelp, time to drown myself a few times to experience underwater hallucinations and then gaze 90 feet upwards to notice the ceiling is barely held together by dryrot, pipes, and the remnants of my feeble sanity. Artists have it rough.

What I Liked: There was a tangible trepidation to spinning in place. All too often, the lightning-fast computational reactions rendered something unexpected and startled my casual investigation of any given room. Decidedly a jump scare, the game rattles cages by stacking inanimate objects to a human height so that you get an eyeful of dusty tomes or furniture when innocently surveying the walls. It very much echoed the scene in Sixth Sense when the mom re-entered the kitchen, only to see every drawer and cabinet open, her son sitting palms-down at the table.

Set pieces like the zero gravity basement were fun, where a sea of storage crates and dinette ware simultaneously became untethered by gravity as the player swims through the mystical wonder, only to have it all come crashing down and the lonesome droning of a grand piano needing to be located. To that end, the physic visuals are some of the most clever I’ve seen deployed. 10,000 floating crayons anyone?

Transitions were smooth as ice. The voice-overs remained emotionally charged and interesting throughout, even if feeling a bit rushed or out of context with the scene.

What I Disliked: Opening each and every drawer, cubby, door, box, chest, bureau, closet, cabinet, wardrobe, and other nouns with hinges got annoying real quick. The action of “gripping” something with your mouse and slinging it via physics engine isn’t quite as riveting as the designers hoped it’d be. There is a distinct lack of player engagement.

Glitches Experienced: Gaslighting my glitch tolerance – several times in late game, the screen started rotating at an almost imperceptible pace. After several minutes, it’d gain increasing momentum before I determined it wasn’t a visual insanity tie-in but rather a nausea-inducing error. Later, I relieved it by pressing escape. 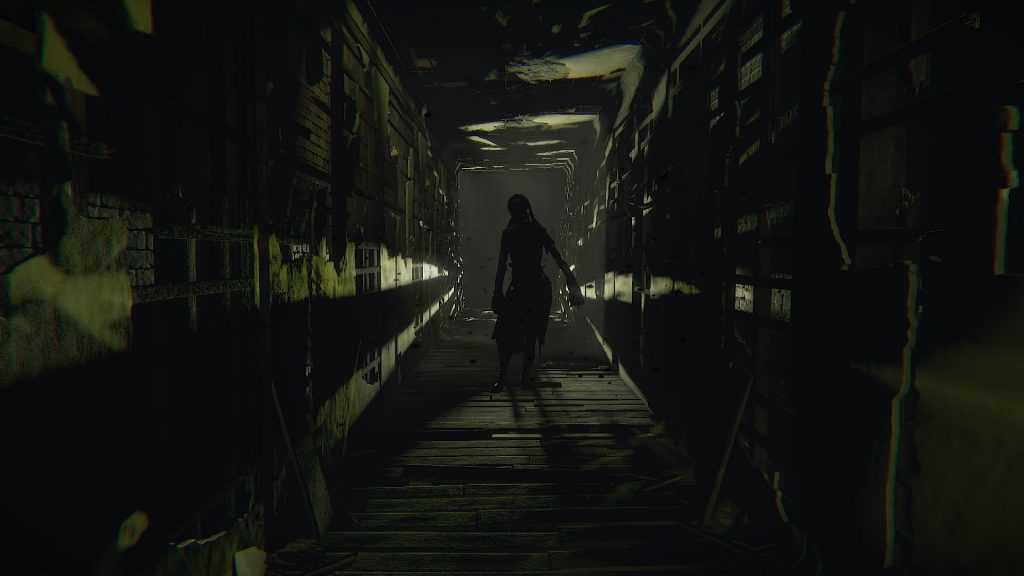 Do I run away or forward? Damn it, game. Make up my mind!

My Personal Reaction: “What do you stand to win?” – some words scrawled upon a lone note in a vacant nursery. This is precisely my standpoint when faced with these sorts of brief jaunts into the final product of someone’s belabored passion. Walking simulators are inherently about the journey though I never found too much enjoyment within, a highlighted facet I’m becoming all too aware of while the game would much rather me savor its shallow story, steeped with ambiance.

Proportionally, you get more enjoyment from this genre than the time spent though the my “bang” for each hard-earned buck is certainly waning. Shirley, many seek the short barrier of entry, few challenges, and low investment – and to them I enthusiastically beckon their attention to Layers of Fear. Grab a captive audience and 3 sessions to share a memorable experience had by all. Or watch your favorite YouTuber play. WTF do I know about social interactions?

Noob Tips: It’s not obvious that there is a “death” of sorts – in which the character fades to black and awakens in a nearby location. This is an obscure mechanic since retaining your bearings is near impossible in a topsy-turvy, madness-induced stupor. Face your fear or avoid death altogether; the choice is yours, but it matters.

Depth and Replayability: There are technically more than 50 mementos, whispers, and rat drawings though most folks will only be interested in the three ending variations. I entertain the possibility that repeat plays could be more enjoyable. This theory comes primarily since stalling the momentum of fun to find the clicky macguffin every five minutes is one of the least enjoyable events. Having foreknowledge of the scant plot devices is a gatekeeper for focusing on the game’s presenation – which is the real star of the show. 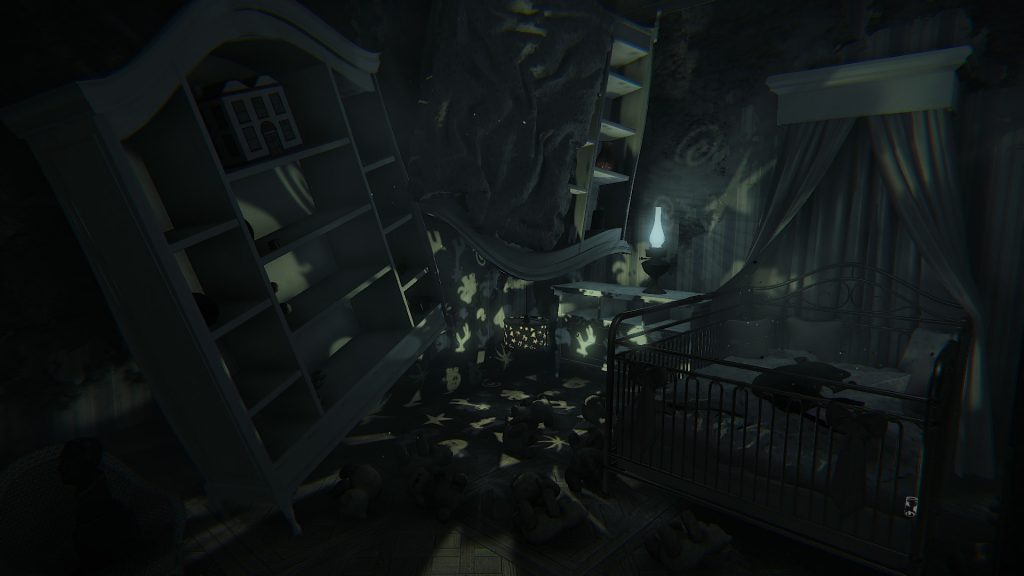 Is the nursery designer trying to cash in on infant insurance claims?