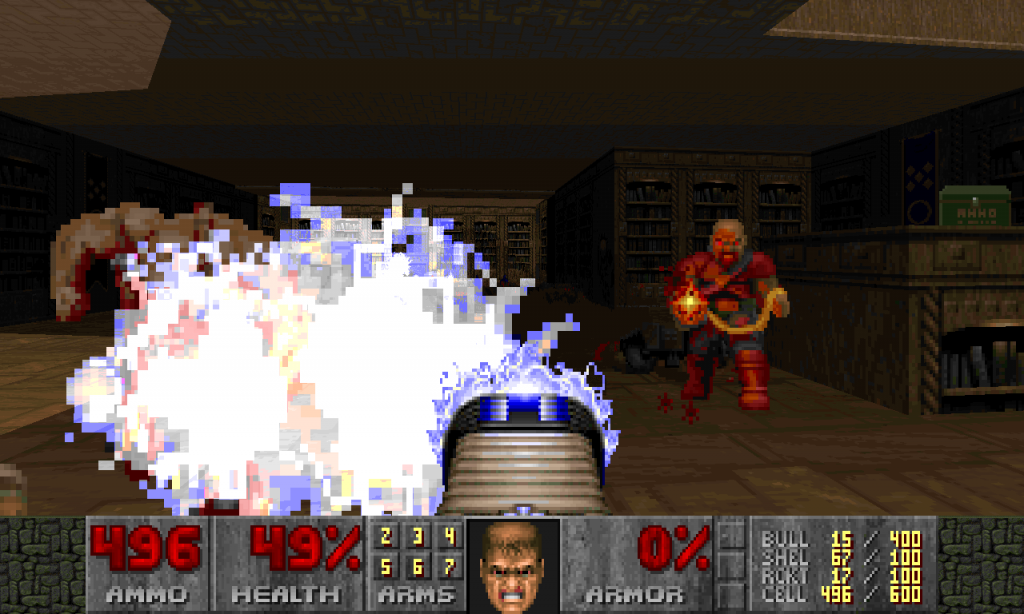 Doom Guy carries 7 arms and by God if he doesn’t wield the hell out of ’em his way – POV center, straight on, and from the chest.

In a sense, this review and game are just an extension of the original DOOM:
http://skullduggery.us/rants/doom-the-ultimate-doom/

May Appeal To: metalheads, anti-socialites in training, completionists, time attackers, true sadists, cheap gamers, and those jonesing for DOOM’s next logical step
May Repulse: sensitive or modern gamers, and probably the ‘games as art’ crowd

Learning Curve: The first DOOM isn’t necessarily training for this one, though the increased difficulty can be better overcome by cutting your teeth previously.
Game Length: 30 minutes X 30 levels = a reasonable amount of jagged, polygonal ambush closets to teleport to and rethink life choices
Difficulty: Adjustable, though if you’re not denigrating your sense of restraint or better judgment at this point why even bother?
Mastery: I suppose one could theoretically stumble across DOOM II for the first time and smash all currently held records and expectations. Good luck though.

Story: The brilliance of the original hinged on the lack of information it presented and the literary gaps your imagination fills to string your predicament with the gameplay with fate (until the discovery that it’s all for the bunny). The sequel presents even less than a final pixelized splashscreen and a paragraph of post-coitus pretense justifying the sloppy buckets of your insatiable gore fantasy.

I see some effort in consolidating tilesets used to represent your journey in, around, through, across, under, below, and merely adjacent to Hell though the unrelated, blocky doodads loosely scattered in an unforgiving planescape do nothing to establish location, time, or importance. This game echos less of a “Dante’s Inferno” punishment stratification vibe and more a succession of fast food placemats designed by M.C. Escher. (One of the best mix masters of his era.) Even the levels of sadistic torture aren’t laid out in a cognizant, sequential way – any old play order will do.

Wikipedia references the presence of congruous thought representing a traditional timeline or ‘story’, though I believe any mythical evidence is fabricated from the daydreams of some poor paint-huffer whom never got corrected after hijacking the world’s most ill-respected term paper resource.

Presentation: The song stealing and repeated tile patterns continue – both more noticeable to me from gamer fatigue or because this is decidedly more expansive and sprawling (once you’ve dropped all partitions, turned on the lights, and are wall-humping for secret passages post-massacre). The levels are social experiments, causing some designer somewhere to squeal in delight each time I become cornered or ambushed or startled. Although I’d love more than 5% of the layout puzzles to be genuinely clever, the remaining percentage feels like cheap rebukement at paying good money for plentiful jump scares in a horror movie. “Sure I succumbed to the game’s deviousness”, one says aloud, “but they turned off the lights and warped 16 monsters in a donut formation around me.”

DOOM II is at its best in the dim gloom, even moreso when it builds tension through meted releases of monsters screeching from some dank, unseen cranny. The hiss of a door opening behind me and the inhuman snarls of its contents infrequently plays nicely off the inaudible red, toothy spheres gliding in my peripheral, poised to unleash fiery death from their maw. These moments aren’t the games forte’ -which is actually flat fields of bloody stumps- but the more subtle moments and tricksy surprises are what I relish most. 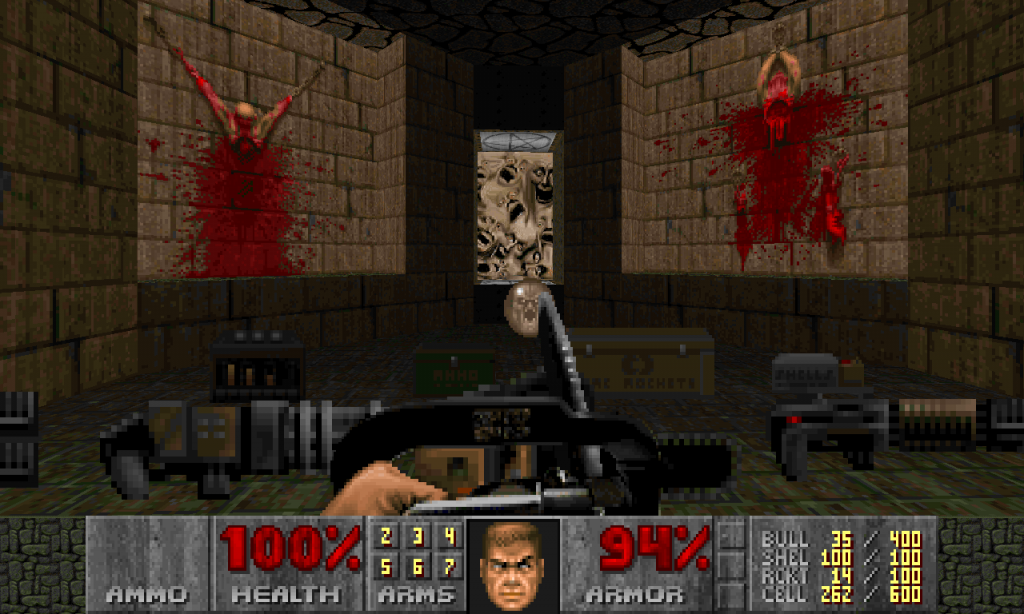 Well, *I* believe the dadaism of these uni-dimensional pieces speaks *to me* of the artists’ mindset. The anachronistic toy guns in a medieval castle, the cartoonish embellishment of its hyper-gore, pleasure amidst madness, and the contrast of 2D/3D eyesores clearly decorates incongruous nonsense across the entire room. How profound!

Unique Features: All of the innovation occurred with its predecessor so it’s hard to label anything unique beyond the brand recognition of abstract level design and unapologetic waves of enemies. This game is about three abrupt teleportations away from exceeding the Portal series’ total.

Gameplay: I came to realize that this is one of the first pioneers of the survival horror genre, though this challenge is thwarted by the quicksave functionality which I admittedly abused. I have a high degree of appreciation for tasking the player with finding and expending each resource in such a way that nothing goes to waste. Many times upon level’s end, I was in bad enough shape that combing the previous swath of evisceration for 3 armor shards and a small medkit was logistically necessary. Unlike DOOM, health and ammo persist throughout the entire playthrough and smart hoarders know when to thrift, and what weapon hotkeys dispel unfair and sudden hordes at a moment’s notice. You’re gonna need those skills since the original bosses now populate this game’s common selection of slobbering rabble, flanked by what feels like double the typical toughness in monsters.

Additional Comments: A new Super Shotgun is hardly enough to warrant a footnote though the placement, quantity, and variety of foes does allow this game to exceed the original in at least one facet. It felt like there was more opposition and like a true militaristic mobilization of Hellspawn was railing against my slogging progress.

What I Liked: Instead of 3 [or 4] truncated episodes, we get one long trek in which fastidious item collection and spelunking pay off. No longer am I counting bullets and doling out enlightened retribution in bargained chunks for the hell of it. The game’s engine optimization doesn’t mean much to us in a future of unfathomable processing speed, though the efforts equate to developers’ ability to construct a bigger, intensified experience that underscores the game’s ideals. I also like chainsaws.

What I Disliked: Does anyone ever use the spiked punching attack? Useless. Also….

Where the Dark Souls’ series has continued proponents of some honorable pirate’s code lauding ‘tough but fair’ in which the player has a fighting chance should only they be skilled or perceptive enough, Doom II makes no such pretension. It’s best just to drop your trousers and walk backwards into the awaiting demon throng. Keep the quicksave/quickload buttons handy since it’s an unabashedly stuttering experience of pitfalls and pratfalls at your expense till the very end.

Hours I Played: 20 on Ultra-Violence

My Personal Reaction: For better or worse DOOM II does challenge the player. Maybe not so much in the elevated balance of finely tuned machinations sense that they articulate in game design philosophy circles -this predates that- but more in line with an immature mischievousness that yields its own sort of fun and flavor. One school of thought is a fine wine being sipped by cheese snobs, the other being a fraternity hallway slip’n’slide greased by beer. Both are acceptable in measured doses.

This game errs much towards the latter – I have my phone, wallet, and sobered up enough while looking for my dumb friend that drove us to this party, but his dumb face is nowhere to be found and I think I saw police lights, streetside. It’s not fun anymore. It’s time to go.

Noob Tips: If your purchased copy of DOOM II is a cheap port with crackly sound and bad resolution, ZDOOM is an emulator that works in a pinch despite it duly sacrificing authenticity of whatever experience you’re looking to resurrect.

Depth and Replayability: Its potentially as deep an FPS as you want it to be: lite puzzles, secret rooms, multiplayer. The run and gun, modular, disjointed experience makes it easy to pick up though putting it down is equally effortless. 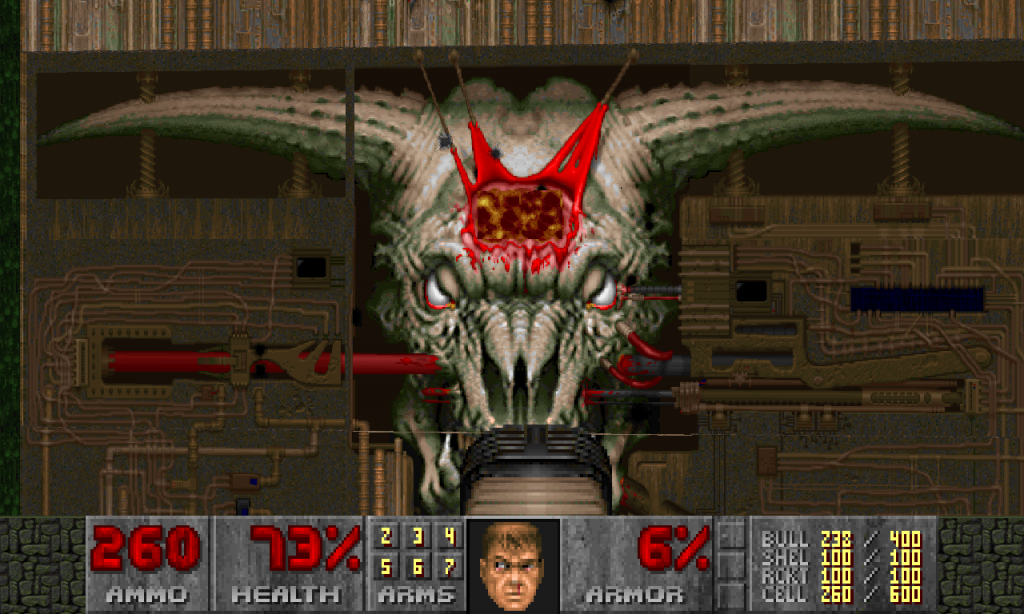 A man-sized column rises from a vat of corrosive shit water in 360 degree view of this massive room infinitely spawning high-level demons. Even brain surgeons lack sufficient precision to fire rockets at its weak spot in freefall.