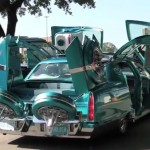 [Chrysler excluded], any kind of after-market car mod is scientifically proven to divide whatever dignity it once retained and exemplify a concentrated waste of human effort…. unless the goal is to burn cash and impress drug dealers with more metal in their grimaces than a chromed exhaust tip. Like a stage production cobbled by an elementary school of mentally challenged paraplegics (where scotch tape holds both the cardboard scenery AND disparately-sequined costumes together), these rolling abominations are labors of love to which bystanders can only mutter and hope to shake their furrowed brows loose with tight head motions. Here are some guidelines to ensure that your slab/donk/hoopde is nightmarishly ostentatious, exhuding all the charisma of a shrieking tantrum exhibited in a Wal-Mart checkout lane. 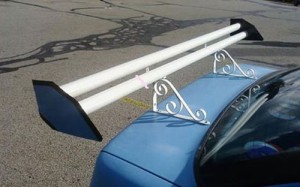 Wings
Wings generate lift in birds but are flipped downwards in high-performance race cars, allowing for increased traction at break-neck speeds. Because the air rammed beneath a carbon fiber body at 200 mph can cause dangerous fishtailing, it’s a feat of engineering that reversed wings increase a car’s “weight” on straightaways while reducing the effects for tighter cornering. What does a hastily constructed wedge of tiered metal do for a Honda Accord with primer bruises? Why, it adds mass, increases drag, and reduces engine output of course! I frequently pray that these overblown weathervanes are misaligned, a bid to put my signature on a cosmic petition that will hopefully force these eyesores off the road and careening into the nearest junkyard. 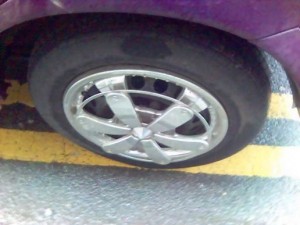 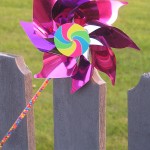 Though you never see a set of four rotating in a tandem direction, I admittedly thought this shit was as cool as Dragonball Z back at the turn of the century. Thankfully, these vertical roulette wheels are no longer popular among flat-brimmed thugs with dem phat bling, yo. Either that, or legislation successfully lobbied to have them banned as unnecessarily distracting to motorists who aren’t expecting to see a thumpin’ suburban peeling out (in reverse). 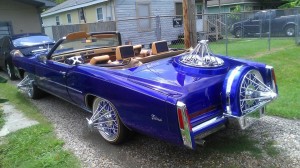 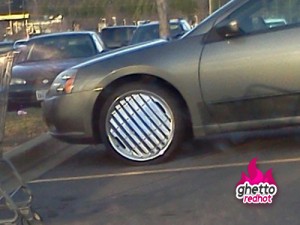 Rims
Ah, the layman’s entry into the world of cosmetic modifications! Even if years of Lowrider Magazines -their rippled pages glued together with semen- hold down a wobbling coffee table in their own foul-smelling den, many car enthusiasts won’t know what jargon to use in describing the tangled mass of gleaming intestines found beneath an automotive hood. Should they wish “car talk” without full commitment to a soliloquy at the behest of an actual mechanic possessing verbal kung-fu, there exists one phrase that simultaneously relieves them of conversational responsibilities and technically counts towards a contribution in the social hazing-ritual known as “tolerating pompous assholes”. Something these laymen DO know to say can neither be disproven nor disputed, and avoids an invitational minefield should they accidentally mention something in proximity of car pieces that actually matter. “Those are some sweet rims”, states the savvy wannabe. Nevermind that aftermarket cheese graters resemble something designed to wreck Benhur’s chariot. 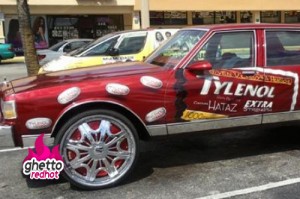 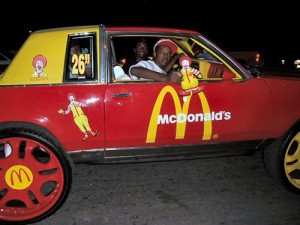 Branding and Mascots
What does Dora the Explorer, the Incredible Hulk, the Pilsbury Doughboy, Cheetos, McDonalds, Skittles, Crown Royal, Fruity Pebbles, Aquafina, Tylenol, M&Ms, Bud Light, Lucky Charms, and Dunk ‘n’ Donuts all have in common? For starters, the parent corporations aren’t paying gold-toothed convicts in stained wifebeaters to plaster over-sized decals on themed cars as advertisement…. But the gaudy stickers are there regardless. I’ve heard two explanations: 1.) some monotone rapper expressed his distaste for a particular breakfast cereal while an opposing chest-puffing rhyme-reciter countered his earnest opinion and it spiraled from there. 2.) The bizarre endorsements represent the type of drugs the occupant inflicts on his community. In either scenario, though, the driver is likely to be avoided since he’s “badass” enough to pervert children’s cartoons and crazy to spend tainted money in driving a grocery list. 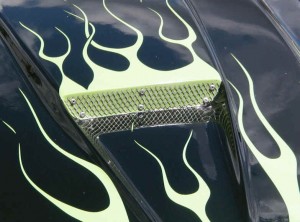 That Stupid Flame Pattern
When will humanity acknowledge that these wavy pitchforks look nothing like flames? (This goes for you TOO Mike’s shirts from the 1990s!) Something that remains understated in most technical courses or even communal knowledge is the fact that vehicles do not operate well under temperature duress i.e. your shit don’t work when it’s on fuckin’ fire, guy. Whether the rows of hallucinogenic snake tongues presented in shades of rainbow are a camouflage to spare embarrasment in the event of the eventual engine crisis is yet to be determined. One thing is for certain, however; these vehicles are a “la cucaracha” horn and two dashboard Jesuses away from invoking an unconstitutional search-and-seizure in the great state of Arizona. 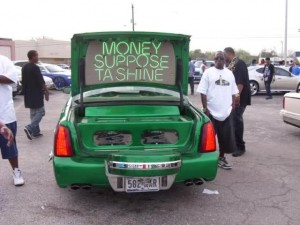 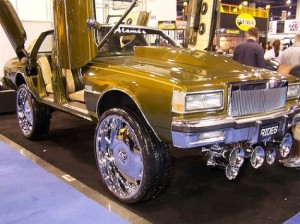 Metallic, Pearlescent, and Baby-Puke Paint
Continuing the spirit of waving your limbs like a coked-up windmill and bass-blasting a crowd until all toddlers and a confused businessman glance your direction, “glossed insecurity” is the hottest new color in Crayola’s arsenal. Unrelated, punks and thugs like shitty car paint. An Aston Martin can’t pull off a single shade bridging forest green to olive to teal, so why a flourescent Cutlass Supreme would fare better can only be determined by Poseidon, our Lord of the Sea. In theory, the aspect of changing colors based on viewing angle -naturally accentuating the sensual curves of a purring road ripper- is stuff of science fiction, but the actuality is wholly disappointing. Besides the practical application of finding your shit-mobile within the parking lot edition of 50 Shades of Gray, it is ill-advised to both test and cultivate the urban myth about low-frequency “brown noises” while driving something the color-antithesis of diarrhea. 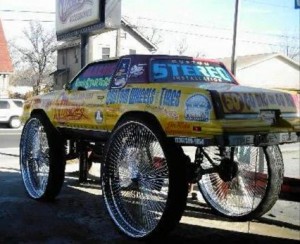 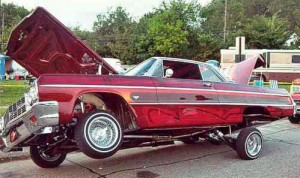 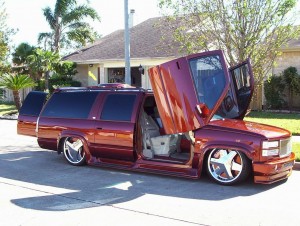 Height Kits and Hydraulics
In skyjacking themselves above their self-bankrupted family of poor choices, these drivers roll the metaphorical high life in attempt to assert dominance over anything that isn’t a shared second bedroom of the latest dilapidation they’re house-squatting. The irony is that not only will the struts snap at the first “slot car” inspired lane shift in sight of that street-walker with exposed jean pockets, but the modder’s life investments are tied up in a rack of flimsy suspension, pre-bought with the undelivered promises of six ounces of [that low-class street weed]. Height modifications either leave purple shit-smears of “tacky” over even the slightest concrete incline or shout to the world that, “Those aren’t potholes giving me whiplash; I denied myself 3 demonic clown tattoos to commission this death-carriage!” 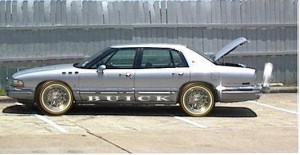 Car Make and Inches?
For the benefit of light-sensitive glaucoma patients seeking buyers for their ’90s luxury tanks, urban denizens now have the option to display the make of their glorified automotive interests in giant honkin’ letters that are legible from lower orbit. “I Buy Used Status Symbols” would be more appropriate to emboss in reflective decals than a Godzilla version of what your hubcaps, the hood ornament, fenders, the steering wheel, and each belt buckle already informs the general public (who likely know WTF a “Buick” is)…. but do whatever you want I guess. Idiot. At first, I assumed the accompanying measurement was an indication of font size (a snafu similar to literal instructions found on “cake wrecks”), but apparently not. Since redundancy is a staple of some people’s waking hours, let’s include a rim width notification…. just to deflect the question, “How big are those dumbass wheels on your land yacht?” 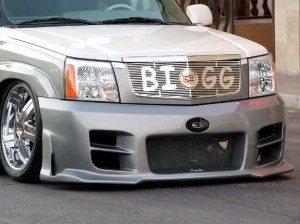 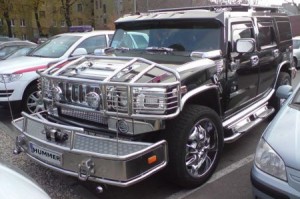 ChroooooooooOOOOOme
Does anyone think that their gas-guzzling top-heavy lard transporter resembles a diamond instead of a lead-laden Chinese toy, thin sheens of silver enshrouding toxicity? I swear, people are raccoons and birds, man…. meaning they’ll snatch up and eat anything shiny…. and maybe die from it. Okay, riddle me this: Were there compelling reasons beyond luster why Gold became the ____standard for the world’s economy? And while there’s nothing officially wrong with the physical property of reflecting light (beyond the pitfalls of finger smudges, ding accentuation, and blinding other motorists), the glistening grill of a man’s substitute teeth at the wheel of a “blinged” automotive grill exudes as much class as a wrinkled piece of aluminum foil. Furthermore, that wrinkled foil entombs a moldy burrito chock-full of indigestion. 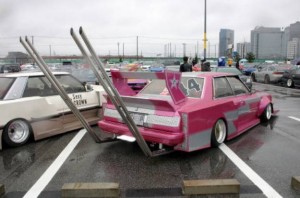 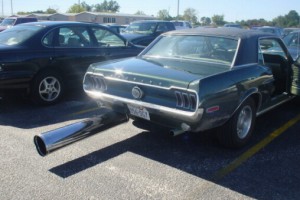 Exhaust (Whistle Tips, too?)
Excluding twin “devil horn” systems that inject noxious gas skyward and away from a trailing car’s air filter (both practical AND stylish), exhaust modifications generally bear the brunt of my chrome criticisms with the added perk of dispensing two types of pollution. Imagine a bustling city street where a decroded Mustang goes sputtering by with misfiring pistons, each wheezing burble of bees gaining traction being enhanced with the masculine bellow of a Siberian bear defending the borders of his subterranean abode. Each beater has its own distinct myocardial infarction which trumpets its arrival, made resoundingly hollow by a gracious tube of shiny girth. In fact, if your car is identifiable by sound, alone, you are likely in possession of a locked fan clutch or have committed infractions against your exhaust (i.e. have ponied money for snorkels when your horses get winded via mailbox sprints). As a side affect, many vehicles sound sexier than they are capable and fall laughably short of their big talk like the braggart poseurs I am currently comparing them to. There must be a better way to phrase this…. 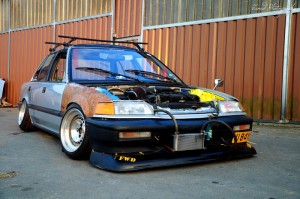 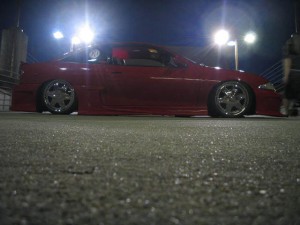 Skirts
Like an itchy dog’s ass on warm pavement, car skirts are designed to hover gracefully across our gray matrix of switchback elevations, driveway inclines, speed bumps, and oh…. wait. They can’t handle mere inches worth of clearance? Well, if a modder is interested in cartographically analyzing the topography of his favorite late-night Denny’s and has memorized his city’s constellations of potholes better than the collective list of weekly drink specials, then a sweet set of strap-ons for his manly vehicle are viable. Because the skirt aesthetic is used by professional race cars to increase drag while providing stability on smooth meticulously-engineered tracks, the concept becomes commercially feasible in only flat, mid-western states such as Kansas. He just better hope that Autozone’s operating hours overlap with those of the generic topless bars with surreptitiously suggestive names, because his supply of Bondo and car’s skirts will drop faster than a strippers’ pride. 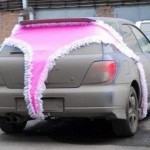 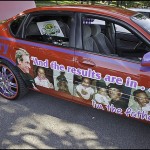 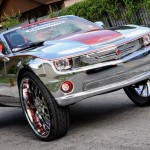 Pardoned: Manual-shifters capped with red-eyed plastic skulls, those stick figure family decals, hula girls, and Jack-in-the-Box antennae balls are all okay in my book though. 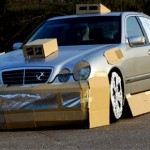 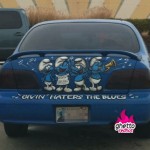 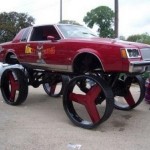 2 thoughts on “Car Modifications are Stupid”