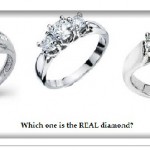 So, I was at work today and I was talking to one of my coworkers about some interoffice drama bullshit. I might get into that later when the mood strikes me. Any ways I was talking to my coworker and for some reason the raccoon in me was attracted to a shiny rock on her hand. I am usually really good about keeping eye contact and not looking away and blah blah blah but this rock was HUGE! I find that I often do that when I visit my grandparents-in-law. She too has this enormous ring. It is like that special diamond that comes out on that movie Congo with the crazy ancient killer apes. Well the diamond is supposed to be able to set of this crazy laser gun. Both rings are so big, and despite having already seen it, I cannot look away. I want to ‘cause I don’t want to make them uncomfortable, but wearing something of that size is like painting a big red dot on the center of the Mona Lisa. There is no way that you will not be able to not look at that red dot.

Getting back to it, it looks like an engagement ring.  She previously wore a modest sized diamond and her wedding band. Now there is no wedding band and there is nothing modest about this ring. I know it’s real without even asking. Her husband seems the type to want to give her everything beautiful and amazing in the world. I am happy for her and it is sweet of him to show her that he loves her with a diamond that big. Plus a bunch of cultural factors play into this as well. Bottom line, it is beautiful. But why the new ring the last one was just as nice. That question will never be answered because I am too chicken shit to ask.  She tells me about their life together and all the nice things he does for her and I can’t imagine a ring ever meaning more than the little things he does for her.

Then I thought about my own sister. She and her boyfriend are always in some crazy financial bind, but they live lavishly, spend indiscriminately, AND she has estimated the cost of her ring to be 8 grand, for when they engaged. Why 8 grand? I don’t know. It’s a diamond that was dug out of a mine with a golden pick axe, placed on a silver platter, “carriaged”  all the way back in Cinderella’s magic pumpkin, to the factory guarded by the Transformers autobots,  then shaped with a tool that too was made of gold and finally shipped to Jared’s in its own personal first class seat on a Pan Am flight??!!?? My possible future brother in law agreed to it. Is it not enough that he works some fucking stupid dead end job that he hates and is growing sick and tired of and agreed to buy that ring? Isn’t the gesture enough? I mean how many jobs and shifts will he have to take so that you can have a custom ring on your finger? This guy is telling you that he wants to spend the rest of his life with you and your cats. He knows the potential risk of you becoming the crazy cat lady and he still wants to live out his life with you. He accepts that you like to wear big shirts and he knows you fart and poop. If he gets you a ring from Target that looks like a real diamond does it mean that he will not love you without your makeup?

So out of curiosity I asked her, why such an expensive ring? She said well diamonds are rare and one of a kind and blah blah blah the ramblings of a person set in their ideas about material shit. I left it at that because if I questioned her any further I would be thought of as envying her boyfriend and his willingness to buy her an eight thousand dollar ring. Not the case.  Then I was thinking about it, who the fuck cares how rare they are? Is it really worth spending that much money on?  How often do you fucking get proposed to? How many times in your life do you think you will find someone that you feel is worth spending the rest of your life with? Are those life events not rare enough that it needs to be commemorated with an expensive piece of jewelry?

Then I got angry about the women who flip the fuck out about getting a fake ring. And then they cry because they measure how much they are loved based on the value of a ring and because the diamond is not really? I have seen real diamonds, and I have seen cubic zirconia and moissanite or whatever it is called. They are identical. The only way you would be able to tell if it was not really is if you took it in to a jeweler and the old guy behind the desk pulls out his little monocle binocular magnifying glass hybrid thing and looks at it REALLY closely.  How can the naked eye tell by taking a quick glance or even looking at it for a few seconds that it is not real? You can’t.  At least not the typical run of the mill diamond wearing person.  They are identical to the naked eye.

When I was proposed to I was handed a glow stick bracelet. I loved it, it was cute. I might have cried out of sheer elation but I was in a bird house facing my intense fear of birds. I might have been okay but they were jumping all over my then fiancé now husband and biting, squawking, and explosively shitting all over the god damn place to really take it all in. The glow stick was temporary, but I kept that glow stick for a while and then I think I accidentally tossed it out and felt so bad I kept other glow sticks hoping that maybe one of the ones I was saving was actually mine.  That day he  was giving me more than an “engagement ring” he was trying to help me extinguish my worst psychological fears by pairing up a good memory with something that scares me. He thought about me. He was being crapped on and bit and it hurt, but he was keeping it together for me so that I could walk to the front door of the H.E.B. without needing him to run ahead of me to scare off this sly pigeon.  He took the time out of his day to take me to the zoo and entertain me while I raced from one cage to the other like a kid smiling at all the animals. His proposal was more than a ring. It meant that he finally felt close enough to me to want to spend the rest of his life with me. I was the one person in this giant world amongst the billions and billions of people that he chose as the one person to marry in his lifetime. I am the one person that he decided was worthy enough to take along with on this adventure. I don’t see the glow stick, or the ring he eventually bought me for Christmas that turned my finger green.  I see a guy who vowed to only ever get married once and chose me as his wife. On a side note, I would have continued to wear my ring if I didn’t think that weird minerals were seeping into my skin and going straight to my liver through my blood stream.  I still have it displayed on the tree of jewels.

When you look down at your engagement ring will you think of the ring or the man or woman who gave it to you and all the events that lead up to it? Will it even matter when you lay on your death bed and think of your life? Will you remember the freaking eight thousand dollar ring or all the happy moments that you shared with the people you loved. When you’re old and grey and you’ve experience heart aches, loss, depression, joy, separation, happiness etc  is it the ring on your finger that will be telling how fulfilled your life was? So to all the guys who were ever given shit about the rings that they decided to buy for that “special lady”  fuck the ring, your love is worth more than a piece of metal with a gem that can get lost or damaged.  And to my husband, thank you for picking me.