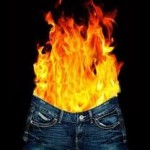 I recently ran in to an old “friend” from college. BUT Before I continue let me say how weird that feels to say that. It sounds like such a cliché. As if I was that old, but still.  Any way, so I run into this “friend” from college that used to take some of the same creative writing classes I took. I think we were both drawn to them because of Dr. Jackson. He was this incredible professor that really allowed you to write. He was the very definition of freedom of expression. Encouraged you to just write whatever the hell came to your mind. There was never a wrong way to write as long as you were expressing yourself.

Being as socially awkward as I am and socially underdeveloped, the only thing that I can connect with someone is based on the experiences that we share. So Rob, my “friend” and I are connected through our semesters together in Dr. Jackson’s creative writing classes.  After about 7 years we had a brief encounter at the checkout lane at the Half Price Books store. I saw him from the waiting line and knew it was him and rehearsed it several times over in my head how I would make an introduction. I considered that he may not have even remembered me because I wasn’t that good of a writer and we only ever shared a Corona and a few slices of pizza during our book release party.  So I ran through all the different things that I could possibly say to him and nothing seemed normal. I was getting that weird kind of nervous where you only smile with your mouth and not your eyes and it looks strange, and your cheeks get really hot and you feel A LOT redder than you really are.  I even got that weird nauseating feeling where I got kind of dizzy and confused, and all the stuff that I had considered saying, had all escaped me.

He calls out , “I can help the next person.”  So I walk over there with my Lonely Plant “learning tourist Thai”  book and he says to me, “Suelynn?” He has this look on his face that lets me know he knew who I was but wanted to seem inquisitive incase I was not that person. LIKE a fucking parrot I say, “Rob?” knowing full well that it is THE Rob from college.  We do that cordial hey how are you bull shit, where has life taken you, the economy conversation about how it sucks we’re both stuck at places we don’t want to be, I bought a house and we’re both married. Just when I think the conversation is over and I am ready to say, “Good bye. Good to see you!” I get the big question. “So are you still writing?”

Technically, I am always writing. I have a bunch of little notes at my desk that I did write. I write emails. I write Facebook posts, but I know damn well that’s not what he means. This  “Are you still writing” question  came from the guy who wrote a whole short story that was based on a real life experience of a slow routinely boring night patrolling the parking lot of the Marriott Hotel.  That story had me at the edge of my seat even though it was slowly paced and methodical… lethargic even.  It’s been about 8 years since I last read the story but I remember lines like, “ …as the golf cart lulled him to sleep he dreamt of the places that he never went to but hoped his daughters will someday see.” Or  “ … pronouncing the words like his tongue had swelled so big for his mouth it could do nothing but stick to the rook of his mouth.”  Those lines seem like nothing but you didn’t read the whole thing. It stuck to me.

His poetry was incredible. Reading every word I felt like I wrote the poem, as if every event he wrote about, I experienced firsthand. He just had to fucking ask if I was still writing.  I always remembered tell him how much I enjoyed his work and that I had discovered a new way to love because reading his stuff was like something I’d never previously experienced. He always reminded me that I should never stop writing because I had good stuff.  All I needed to do was develop it and make it stronger and add this and add that and really find my voice.  I could never write as beautiful as Rob. I could try, and I could try real hard, but it would seem forced. As it was it was everyone’s biggest criticisms of my work; that it seemed too forced, which was entirely sad because I was writing as it came to me… as it was being said in my head. Maybe it is a metaphor for how hard I try in real life, but it never seems sincere. (That shit gets me in more trouble than I care for).  Whatever… Point is, I would and never will be as good as this guy was.

So out of (what I thought was) respect for this incredible published writer that I had the pleasure of knowing and the privilege of reading his works I said, “Oh yeah I do. Not as often and as much as I used to but I do.” He said that that was cool and I should come visit him some time and we said our goodbyes. I hadn’t thought much about the writing. I actually didn’t think about it at all. I didn’t feel guilty about my response because I know how much I actually do write. I just never complete a single story. I start with so many stories and never finish them. Mid way through all of them I have some other fucking brilliant idea about another story or some other plot or another character that doesn’t quite fit the story I am currently working on so I start another.  It is one stupid vicious cycle after another, getting stuck in a loop like a freaking broken record.  So again, technically, I do write. It’s not what most people want to read and it is definitely not something I would share with my former beloved Dr. Jackson or Rob, but what the hell, I do write.

Three or four days later my husband and I got into a conversation about writing and how I hadn’t written anything for the site, or how I hadn’t posted a rant and how I should write this and that. Although he was very encouraging it was a little discouraging.  He then questioned why I had actually told Rob that I was still writing even though I don’t really write much.  Well shit! Thanks for fucking calling me out. I didn’t even realize he was right behind me that day till I turned around to go look for him, only to find that he was always right behind me.  I told him how I actually do have folders on my desk tops both at home and at work with half written stories and future idea and character developments I just never got around to organizing and completing.  Defending myself like my credibility as a writer was on trial. I mentioned all the things that I have started writing but never finished. He gave me this look like I was lying or something. Teenage Sue…. Well maybe even college Sue would have said anything to Rob to seem agreeable.  This time though, this time it was married, old, pushing thirty, slightly sad, pessimistic Sue saying, “Yes I still do still write.” Saying yes I did because I truly felt that I still wrote. I was not as productive or as prolific as I used to be, but I did write. I always felt that after being published in a scholarly public university journal, and the departments bimonthly magazine for writers that I had earned my spot… my freaking right to be considered a writer for the rest of my life even if I only produced one more significant piece of writing before I died. Apparently that is not the case…

I didn’t want to be deemed a liar because ever since getting married to my husband being a liar about ANYTHING is something to tuck your tail between your legs about. I have to find technicalities, and really really really  break apart a statement so that it seems like an exaggeration and not a lie. Sometimes I question if it is really worth the trouble, or should I just accept that we are all liars because to some degree we all lie to ourselves and we are all in denial about something?  Young Sue would have said yes… Old Sue says no. It eats at me and it bothers the shit out of me and apparently it was eating away at my insides enough to finally get me motivated enough to write this stupid entry. The point is I did write something.  Now that I have been able to complete this in its entirety do I earn my writer’s status back? Am I still writing? All I can take away from this entry is the question of am I really everything that I have experienced in my past or am I just the things that I actively do and continue to work at?