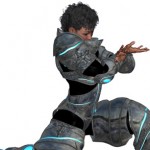 Arcen Games is full of great ideas. I want to get that out there. This indie company is going places and I want to see it happen due to brilliant contributors, great support, and creativity that pours into every product. That said, I’d love to report that I was floored by how amazing A Valley Without Wind is, but that just isn’t the case. This title is chock-full of promise, a real amalgamation of classic gaming archetypes merged with modern technological scale, but I ultimately set my hopes a little higher than the watermark that it did achieve. An emphasis on breadth cuts into the depth of the game’s core foundation, an unfortunate sacrifice for a game that could be one of the “greats” with more effort.

It scratches that itch though. You know that nostalgic yearning that hits at the weirdest times? That feeling you get whenever you JUST want to throw out all of the new-fangled hype and happenstance of modern-day gaming in lieu of a straightforward and simplistic adventure to the tune of a great MIDI soundtrack? This is that game, and it holds onto what was good about that era while simultaneously expanding on the expectations. I dare say that they struck that note well, though many of the design functions hearken a little too straightforward and a little too simplistic.

A Valley Without Wind is a side-scroller in the vein of Super Metroid and Castlevania infamy (Metroid-vania as I’ve heard it called). Your goofy-named character, which you choose at random, is the sole representative of a little village on a continent, a village beset on all sides by a fierce and relentless storm. Different eras of time have collided, bringing with it the elementals, skeletons, monsters, and robots of different epochs in a mish-mash of futuristic junkyards, oceanic depths, pleasant meadows, subterranean labyrinths, and hours of running if you so desired. I’m reminded of the second Legend of Zelda or even the Goonies NES game in terms of dungeon design, which now happens to be entirely done by computational procedures. This means that all environments, all two-dimensional and complex layouts of buildings and caverns, all multi-tiered mazes and massive outdoor and indoor compounds are generated and rendered using complex formulas, that each session of playing this game is going to have a wide, spacious, and vastly different setup than the previous. The “levels” are essentially organized into a grid in the shape of an island landmass, each one opening up about 3-9 scrolling screen areas. On each of these screen areas, you can expect about 0-5 dungeons which reveal up to roughly 5-20 rooms of door-opening goodness. This game is huge. Think Skyrim in terms of exploration, only in a two dimensional format that is presented masterfully with a mapping mechanic unseen in prior video games. You spend your time exploring, mining, stumbling across a nice variety of missions, and pioneering a trail of amassing various equipment and magic to defeat the Boss Overlord that unexplainably rules your continent.

This game delivers on those promises. Where it falters is making those actions a sustainable and addictive gaming experience that can keep your attention for as long as the worlds are big. There are no artistic flourishes like in Skyrim, where you happen across a prone skeleton with a journal and a dagger plunged in its back. A Valley Without Wind has little snippets of background stories, though none are really cohesive and are treated like an oral history of ecclectic paragraphs. What you get is a huge, computer-generated world with a smattering of enemies and a butt-load of dungeons that, although intimidating at first, soon become quite predictable in its formula. And that’s not necessarily a bad thing, if that’s what you are expecting. The Metroids had very succinct and focused maps, with clear differences between the worlds and requiring an intimacy with the gates, keys, secret areas, and techniques to destroy certain enemies. Castlevania: Symphony of the Night had a unified approach, with strange and twisted bad guys within the confines of a singular castle, where every corner was interesting and bizarrely decorated or designed. Both of those games had some degree of character building through weapon upgrades or statistics, just as this one does, but this game lacks something to endear the player to A Valley Without Wind’s environment. Everything seems a little stripped, despite the engine’s best efforts to create detail and variety. 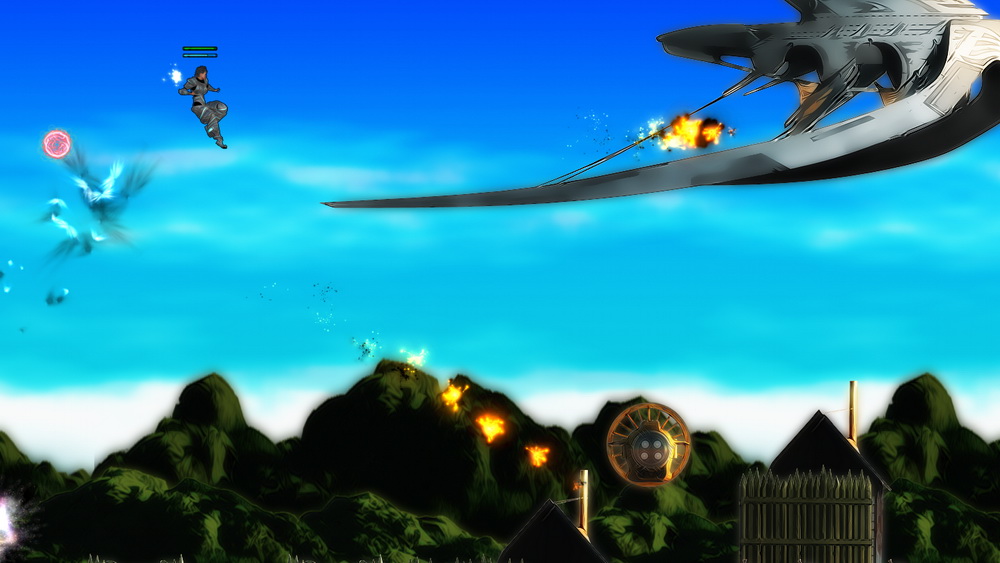 And I’m not referring to the hodge-podge art style. I’ve heard very negative feedback about the simplistic and ecclectic 2 1/2 D-ish art that has anachronistic buildings from various time periods all on the same screen, with various denizens in furs and futuristic armors all mingling together. Although some of the texture choices are on the weird side, I’m okay with this, but Arcen has been putting post-release effort into continuously making the graphics better despite my feelings so the argument is moot in any case. To summarize: the art matches the game’s concept, but it is slated to get better. The music however, just like other Arcen titles, is spot on and shouldn’t be touched at all. What seems like innocent MIDI tunes composed in the style of decades past eventually digs into your skull and you find yourself humming along while you either shop for groceries or wandering aimlessly about your house in the real world.

Some of the strongest features of this game, and perhaps the saving graces, are the mission types. You can’t receive quests in the traditional sense, but tiles on the continent will reveal if there is a hidden mission within, what type it is, and what the reward is. Since much of the game is geared toward placing buildings on the map to improve arbitrary civilian stats or to gather components and equipment to improve your own power, the mission briefings are pretty valuable to give yourself direction in the form of goals and tangible rewards. There are roughly 10 or more types of missions ranging from falling down a tunnel as you try to avoid land mines, playing an assassination type mission where you avoid all enemies in a compound except a boss who is severely weakened, or a rescue mission where you must delve into the dungeon and fight your way back out with a civilian in tow. Others are thrown into the mix like a Missile Command type defense mini-game where you blast asteroids that are targeting hovels or a mission where you must kill all of the anachronistic monsters that shouldn’t appear in that time period. All of these ideas are fresh and presented well for the most part, and offer guidance in figuring out exactly what it is you should be doing in this endless environment…. more-so than the in-depth tomes of information presented at your home base.

In fact, that summarizes the game quite well actually. All of the pitfalls of most sandbox titles are present here but since this is such a unique game, the player may feel a little disillusioned or confused about what to actually do. Power is acquired for power’s sake, evidenced by the monsters manually leveling up before your ability to make newer items. Even after you kill the continent’s overlord, you basically start from scratch on a new continent as you work to get more powerful to destroy the next overlord. You have access to pretty much every spell in the game from the start but the spells, themselves, level up and you may, frustratingly, not have enough mana to cast them. Expanding the settlement is a neat twist on this formula, but a little more could be done to flesh out the reasons to do so. You gather civilians and mine and collect, but it simply doesn’t feel fulfilling when all is said and done. You send them on missions of their own, by the way, where you risk their lives (and moods) to acquire rare materials. Once you’ve upgraded those spells, however, much of the effort seems like a bit of a grind without a true reason and you essentially have to have a REAL drive to go out and traverse new territory fighting the same monsters and collecting the same items over and over.

Luckily, the missions are fun enough and the game’s difficulty scales up rather nicely, though even that is a bit contrived. For example, if you kill enough of one enemy they just change them all out for a harder one. This, like many other parts of the game, can be approached in different ways (even avoidance to make the game easier in surplus to the 5 difficulty sliders) but may leave the player scratching their head and trying to figure out why they’re performing these actions in the first place. This can be likened to playing the original Mario bros. where you run from left to right until the game ends, but without the pressure to beat the level and without the end (yes, I know Mario starts over even harder). Like many sandboxes, you only get what you put into this title, and seems to be intended as a mere diversion instead of commanding your attention for days on end. 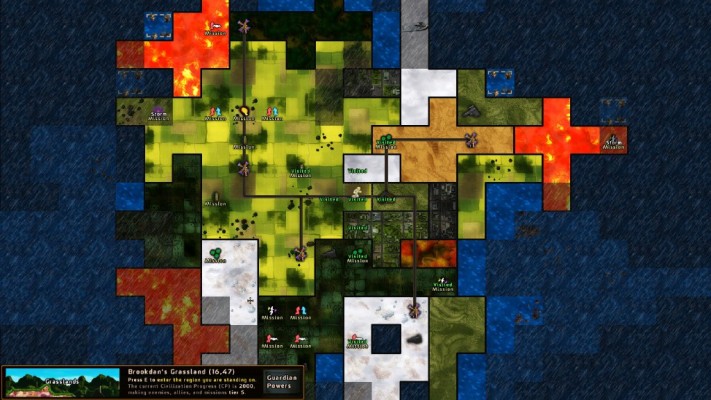 Despite the negative, I still feel the need to go back and play the game even if I feel like I’ve experienced everything it has to offer. Similar to how Brutal Legend was reportedly being “played wrong” because the public had rarely seen a video game comprised of those particular elements in that particular sequence, so too does A Valley Without Wind have an exotic allure that is greater than the sum of its parts but still familiar enough to the fringes of the mind. This game is a weird bird that I ultimately wanted to like more than I did, but because of great and unique concepts, there’s something here that needs to be passed around. If this game can’t be consistently enjoyed outright by gamers, I’d love to see it built upon and used as a foundation for a possible sub-genre.

I can’t whole-heartedly recommend the experience, but Love went into making this even if it doesn’t immediately latch onto you like an old friend. All of the elements are there: the massive scope, the exploration, the customization, the unique mechanics, etc., but something feels naggingly hollow after extended amounts of play. Priced at 15 bucks on ArcenGames.com and Steam, however, you definitely get your money’s worth! I recommend this title to be best played in bursts when you get that nostalgic itch, not plowing through in an intense multi-week session like I did. You’ll probably never see another game like A Valley Without Wind, and that is a sad thought indeed.

Quick Update: This game’s “graphics update” became a sequel…. a disappointingly terrible sequel that botched everything I witnessed within the 3 hours it took me to uninstall it. Avoid both AVWW2 and adult chicken pox if you’ve never seen either.