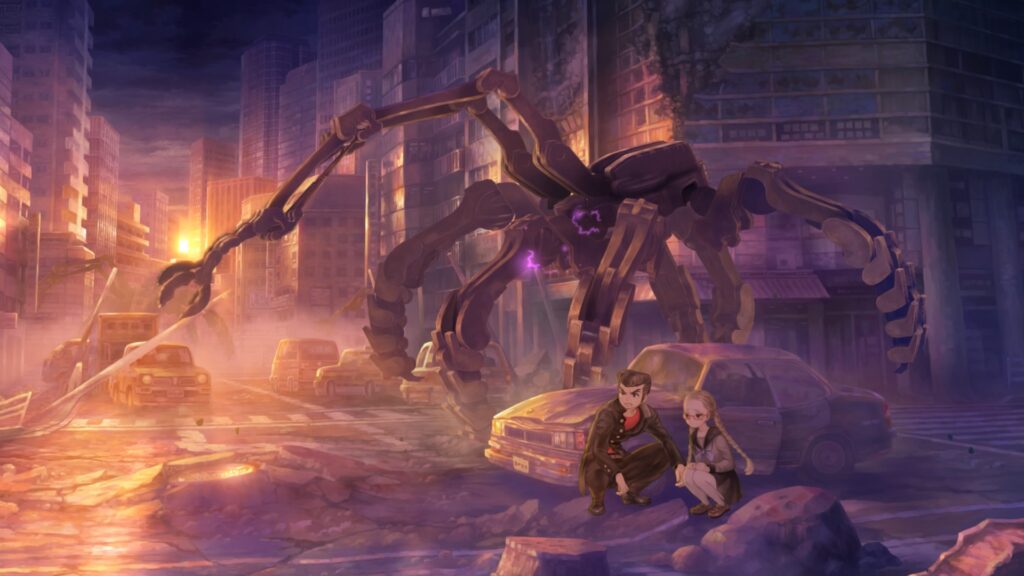 “It’s the eeeend of the world as we know it. And I feeeel…. intrigued.” 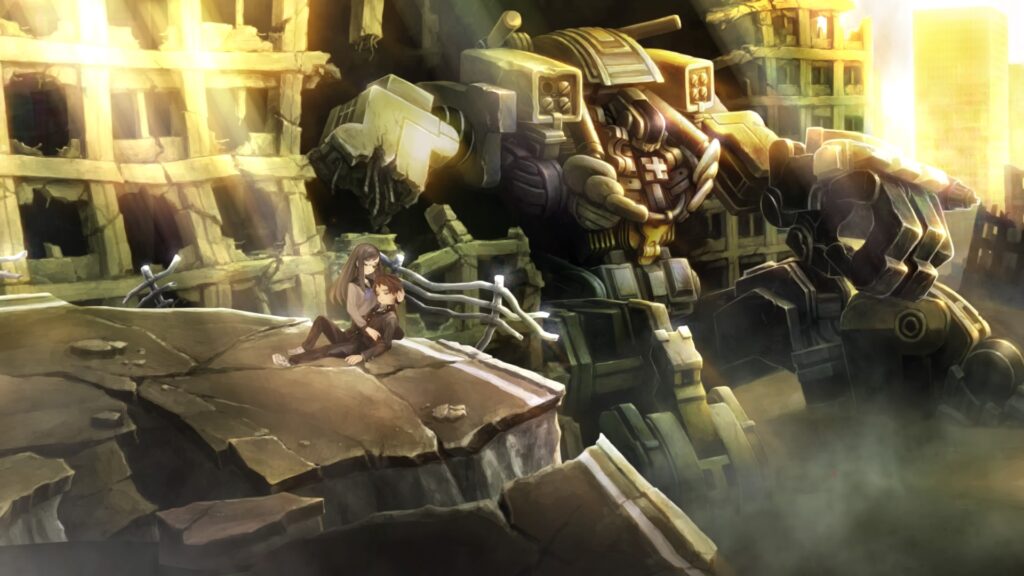 Aegis Rim could very well have more conversation than a Metal Gear title and I’m warming up to the idea of AI War’s battlefield chess maneuvering invoking some similarities here.

Learning Curve: 15 minutes for the Narrative. Perhaps 30 minutes for Battle mode.
Game Length: 30 hours
Difficulty: No-Fail Narrative; Combat is adjustable but is bypassed with minimal effort.
Mastery: Conquering the near-infinite levels in the 4th wave might literally define ‘mastery’ but you could settle for earning a quantifiable letter ranking in however many maps is admirable before being overwhelmed by the logistical challenge and unending stat boosts. Unlocking all scenes and piecing together this interlacing sci-fi mystery through it’s in-game wiki entry collection is almost a moral requirement. 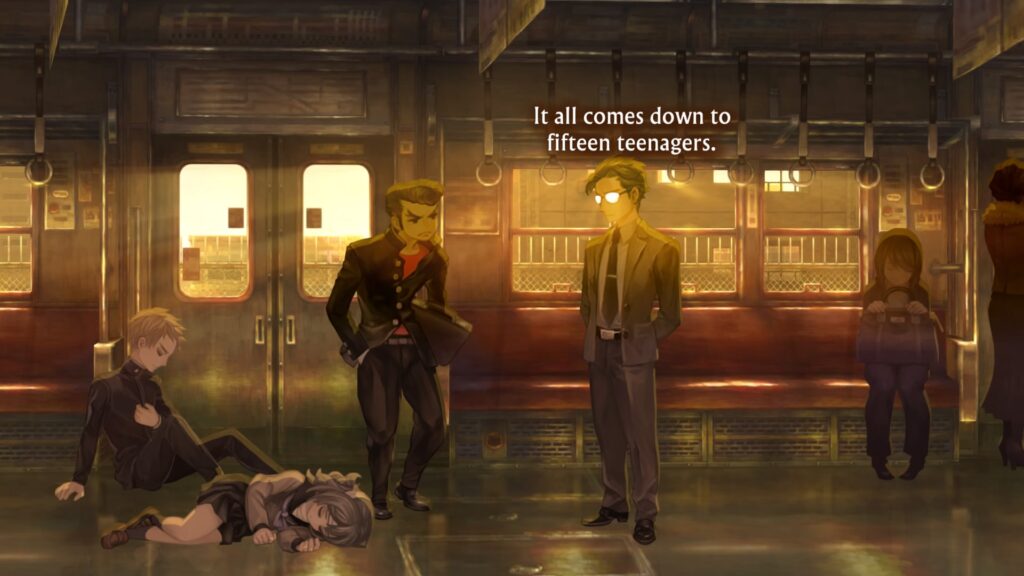 Oh, we’ve got a Gendo Ikari in this one? 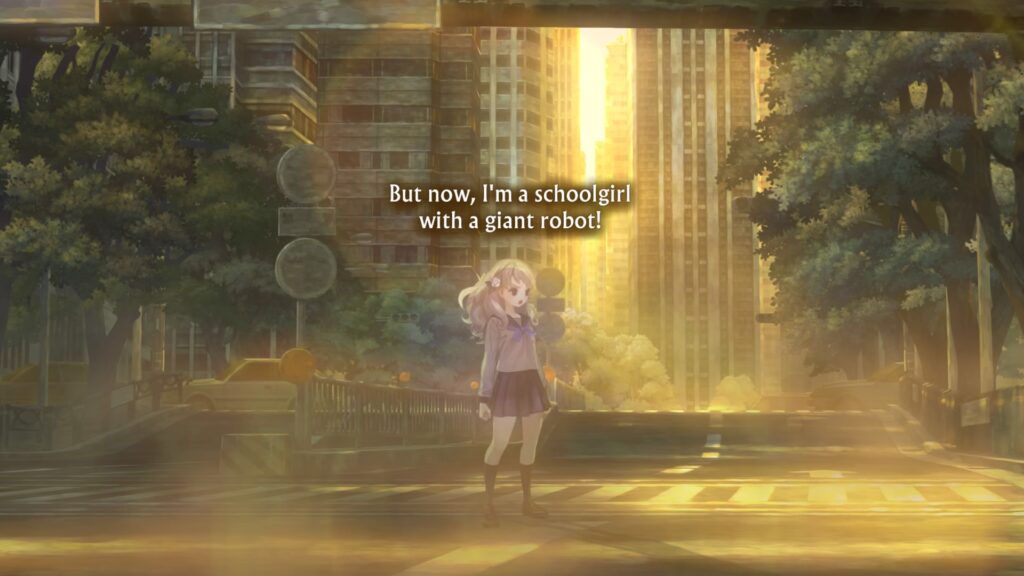 At least it’s self aware.

Story: Tired of sailor-suited Japanese high schoolers piloting mechs? Too bad!
The trope is here to stay, but this game is made palatable by judiciously borrowing from established sci-fi classics, whether they be anime sources or other. Perhaps, like it’s ancestor Evangelion, the tropey trappings intentionally lull you into a false state of assumption that 13 Sentinels doesn’t know how to manipulate your expectations.
(I hope I’m not spoiling anything by reporting it does bear competency….)

News flash – it does. Without announcing what specific themes are from what movie, suffice to say royalties are owed to Westworld, Star Wars, ET, Bladerunner, The Matrix, Dark City, The Terminator, and many more. It’d be easy to dismiss the blended cultural smoothie as a product devoid of self merit and a stolen property, but the exact recipe used to make this concoction did start to grow on me, in no small part to the consistent tempo of plot twists or the poly-amorous melding of disparate franchise themes. 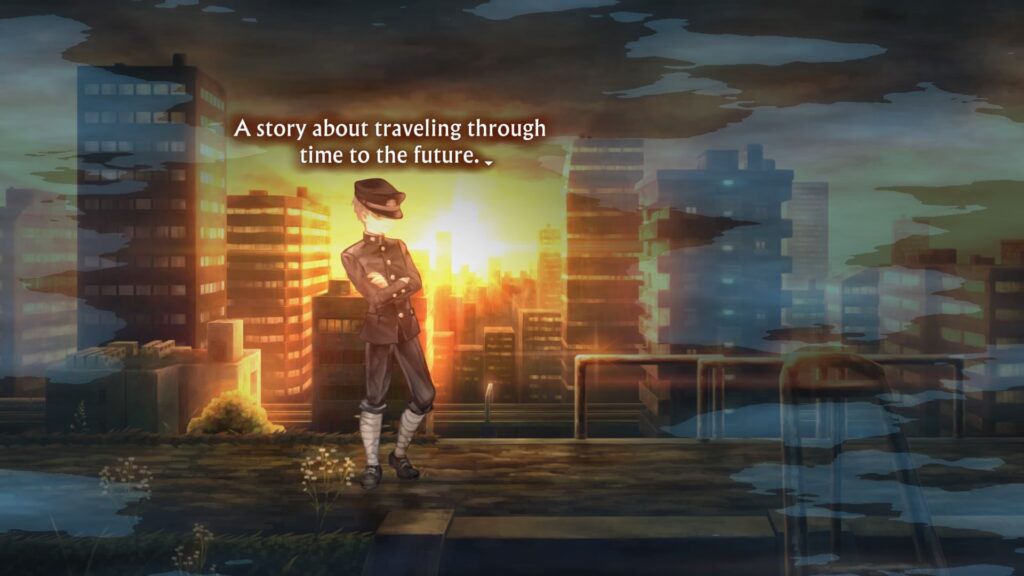 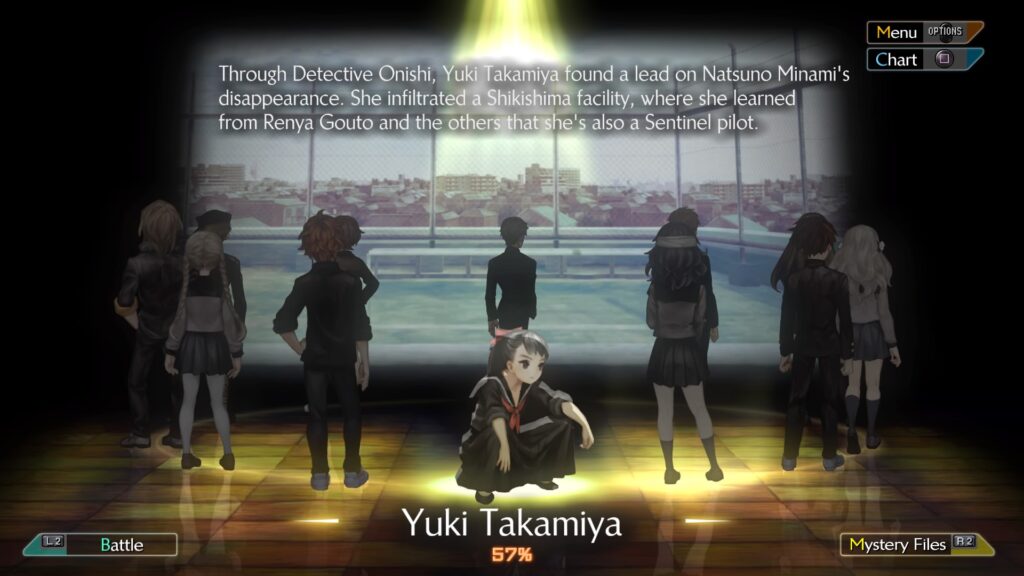 Japanese toilets have always baffled me.

In the vein of a multi-threaded narrative storybook, in which a choose-your-own-adventure path is utilized, the player selects the most interesting character to follow or target the most tantalizing secret to uncover. The story elements are individually familiar, though confounding when presented together, the mind reeling to identify the popular work the next chapter’s twist will be based upon. With that line of thinking, the experience is possibly made better and -more- difficult to discern -because- of a player’s previous media experiences, the effort of trying to “get ahead” of the story beats causing further confusion or surprise when gears shift yet again.

In short, very little is original here, but the exact proportions of whatever sci-fi  source went into the broth is the “secret sauce” that 13th Sentinels presents for the tasting. It -knows- you’ve consumed too much media and challenges you to identify the ingredients.

Personally, I’m not a fan of flashbacks to an exponential degree of Inception or the many awkward moments, but we -are- dealing with Japanese teens after all. (Just thank goodness they’re not stereotypically shrill or hyper-machismo types.)

H-hey…. leave the commentary to me! Could it be that the tropes are a misdirection?

Presentation: Honestly, the graphics aren’t Vanillaware’s best work – and that is typically the biggest draw of their 2D titles. Aside from some sterile, soulless, cheap-feeling battle screens typical of a 2nd rate developer like Koei or Idea Factory, the hand-drawn art is much less impactful than previous accomplishments. Whether or not this is due to my large screen play sessions or overly-used backdrops, the scene-by-scene dialogue sequences contrast pausable tactics map views in more ways than one. It comes across as two different games, a coupling of concepts: one is similar to the soft-edged relaxation of a dating simulator, the other a tense-and-tinny assault on the senses found with digital casinos or frenetic tactics sims. Giving credit where credit is due, this could all be intentional so that distinct emotional states exist depending on your progress in the game, or even amping up the tension during action sequences, but it’s certainly a unique dichotomy regardless.

The UI has all necessary info within easy reach, and manages to make it somewhat attractive in its navigation. One can’t help but draw references to sliding comic book panes for half the game, the other bearing resemblance to classic RPGs with stacks of stats. It’s not to say that extraneous info clutters any piece of the interface, but the extreme ease at progression can be done so without referencing even half of the display. (Like the Witcher, the efficiency at which you win is a challenge of its own.)

Remember NERV synchronicity indicators in Evangelion? This game sure does. 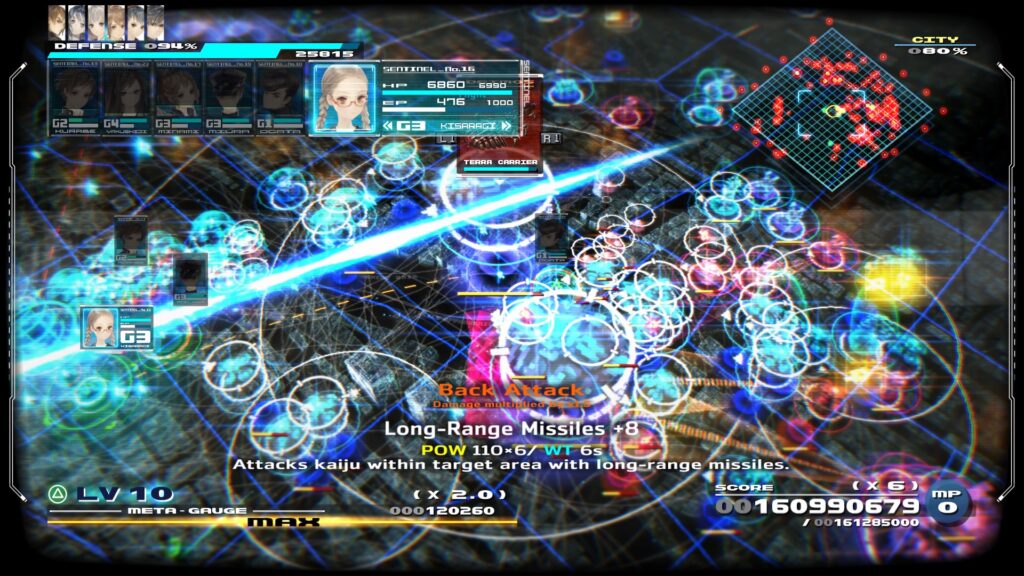 I’ve never seen such abuse of rainbows and concentric circles outside of Distant Worlds.

I’m not a snobby audiophile in the slightest, but someone in charge of this section of the production values just put a big ol’ checkmark next to “has sound” and called it a day. There’s a generic and punchy quality to battle where the dull pops and indistinct bassy  resonance of enemies destroyed, followed by tinkling pips as you collect points, just rubs me the wrong way. The expansive drum&bass or JPop soundtrack doesn’t lend any favors either…. I just don’t like it. This is the worst parts of early 00s techno and generic orchestral fluff. (I’m not a fan, but anyone that enjoys modern anime will probably fall in love with it.) Plenty of effort went into the music selection, for sure, which is why I feel so guilty in how underwhelming it is to me. (Play one more minute of that terrible start screen music and I’m going to scream.)

Fortunately, the primary portion of the game is much less grating in the serviceable, unassuming voiceovers of character interactions and internal monologue. Though it all reads relatively slowly for a game so dependent on conversation, I found the English voice actors quite pleasant, many of the scenes exhibiting a surprisingly quiet atmosphere with little ambience for immersion. (I kept thinking an audio channel had come unplugged.)

Unique Features: Borrows so many plot twists that the result reforges its originality. Melding an interactive storybook with a precision real-time tactics game is a novel concept. During each play session, you essentially choose whether to watch dialogue unfurl or to go destroy swarms of polygonal invaders. 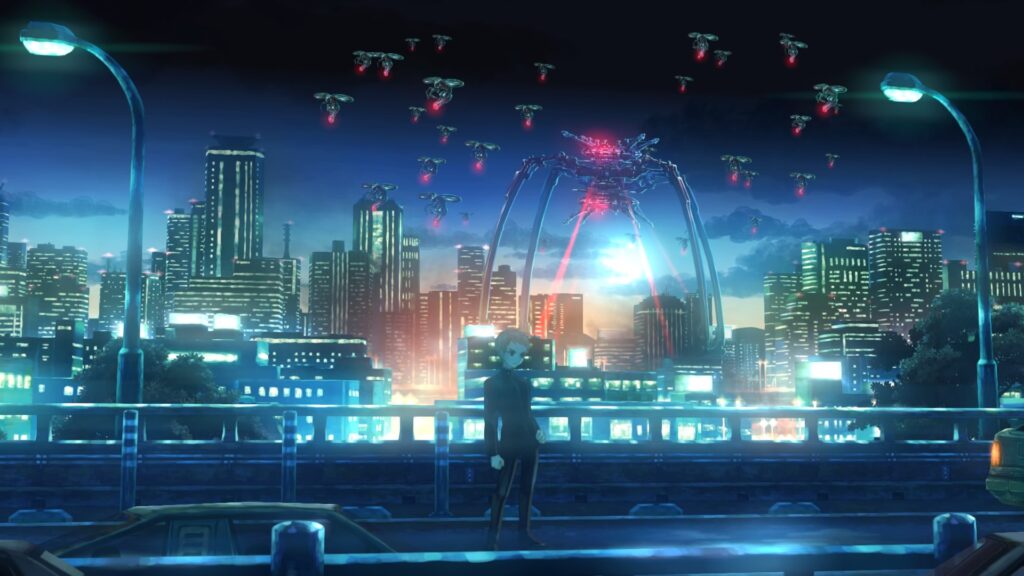 Not gonna lie – the game’s characters are effortlessly cool and the carnage is beautiful.

Gameplay: There are two distinct modes.

1) While not as mechanically complex as a dating sim and not as simple as a “walking simulator”, the meat and potatoes of 13 Sentinels are the elaborately intertwining dialogue sequences across different eras. Each of the pilots (whom you flash forward to control during team-based battle) has their own backstory and viewpoints throughout a convoluted conceptual labyrinth of sci-fi tropes, none of which they individually comprehend on their own. You, the player, choose what scenes and characters interest you most as a generally-on-rails chain of dialogue between 2 or 3 characters draws the veil back on an ever-broadening setting. Light Adventure game mechanics has you “memorizing” keywords to deploy strategically in answering questions or in prodding the next gatekeeper to spill his knowledge about that particular phase of story, but most of the mechanics or scene selections are automated and the risk of failure is non-existent (just an inefficiency in your selections or the amount of iterations experienced before breaking a loop).

Characters are thoroughly interesting but play identically, the only input required being to walk, run, “use”, or select a word from a radial menu. Once the scene’s drama has successfully completed, the player picks from the highlighted characters to begin the next (some late-game scenes being locked behind barriers such as a percentage of viewed character scripts). All sequences are stored for later viewing and a chat log proves extremely helpful if fast-forwarding through redundant dialogue. 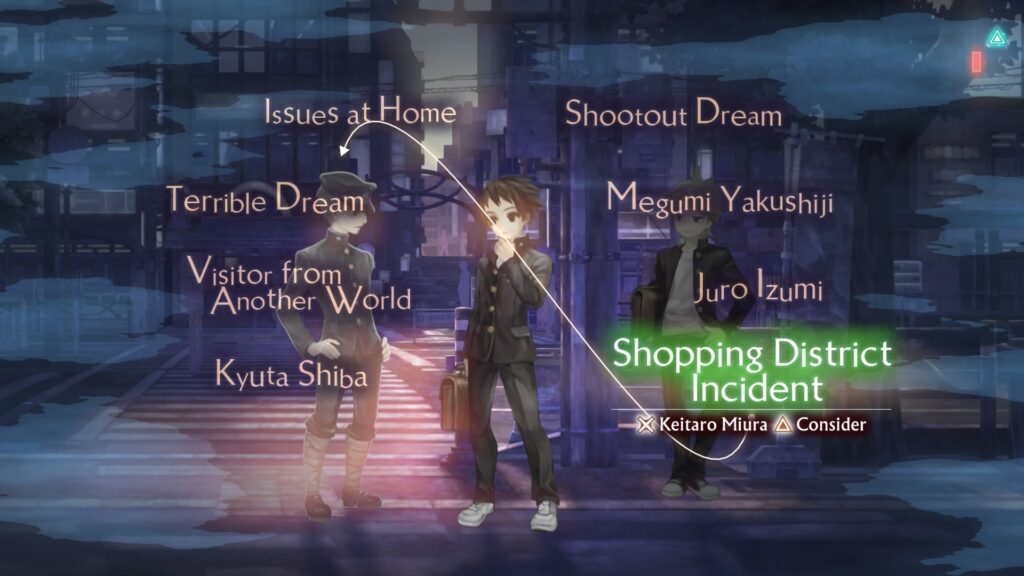 Just hit “X” until the game lets you progress.

2) The soft-spoken intrigue of painterly cutscenes counter-balances real-time tactical battles involving hundreds of opponents on an isometric, procedurally-generated cityscape. Without giving plot away, the good guys are defending against hordes of flyers and walkers that teleport in, who hone in on a single point of weakness that can not falter. Massive cruisers and HQ units serve as carriers as the escalation of on-screen chaos reaches a fervor, AOE attacks and long-range special abilities being the tools of their demise. The mecha represent different generations of development, lending themselves to differing roles of Sniper, Brawler, Fire Support, or a mix depending on how the player allocates their experience. (The characters even develop close bonds with each other, manifesting as numerical bonuses that augment individual tracking initiative and power on the battlefield.) Suffice to say, there is plenty to spend XP on and the positive feedback loop of defeating cloud of bots with high kicks, Dragonball doomsday beams, and missile attacks that would blot out the sun is only hampered by how uninteresting it looks. Min-maxers will get the most out of strategic point investment towards 8+ character traits but it’s mostly window dressing unless you’re full of gusto and motivation to spend the time. 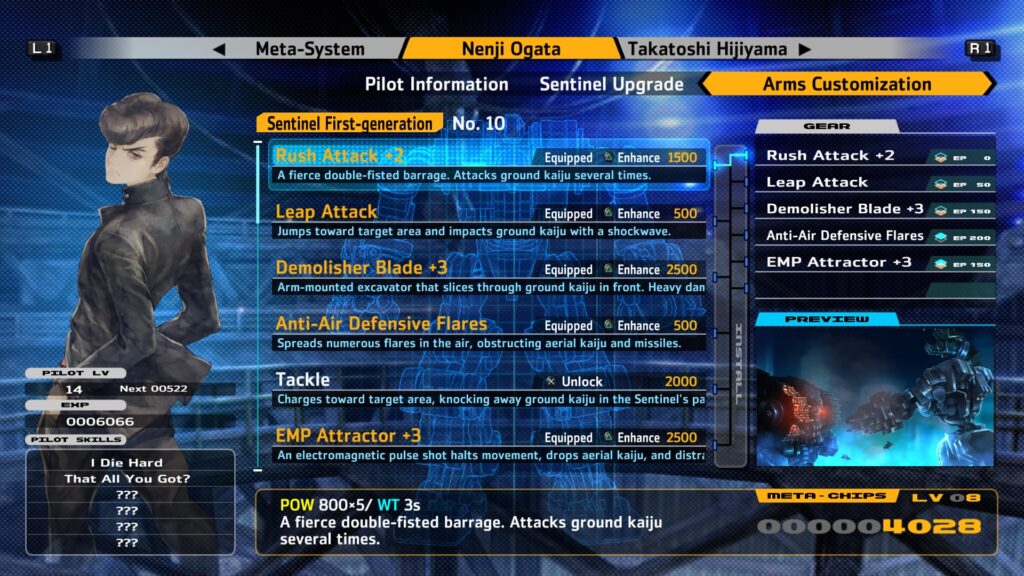 Don’t feel overwhelmed. This is the squad based tactics version of RPG grinding. 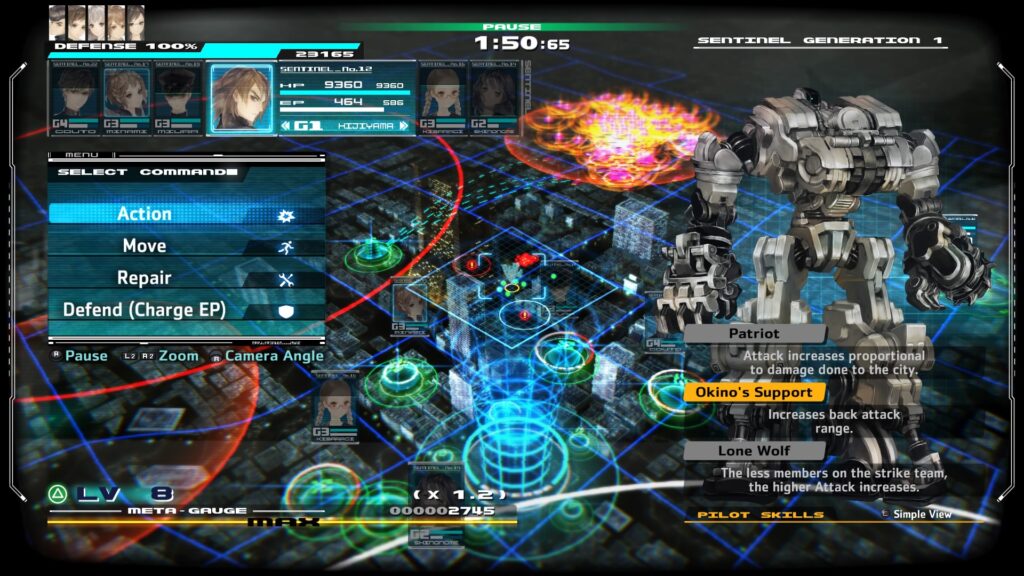 We’ll burn this whole place down if we have to….

Additional Comments: Don’t have fear that the game downplays the availability of battle scenarios…. Get far enough in the story and you’ll never starve for challenges.

What I Liked: The balance, the story, the developer’s past and present work, the differing viewpoints, the tendency to keep me guessing, the tactical challenge, the graphics, the characters, the simplistic narrative mode offsetting a frantic pixelated turkey shoot.

What I Disliked: Flashbacks within flashbacks – the story structure can be confusing. Sound effects and music choices. Though initially varied/impressive, the painterly art lacks breadth and the assets become a bit too recycled for my taste. Senseless breaks in conversation disrupt an otherwise smooth experience and I severely dislike the illusion of choice when a dialogue partner simply responds with “NO” to railroad you towards the correct option. The branching scene map could have been more strategic with its navigation as well, but this is likely an unpopular opinion. 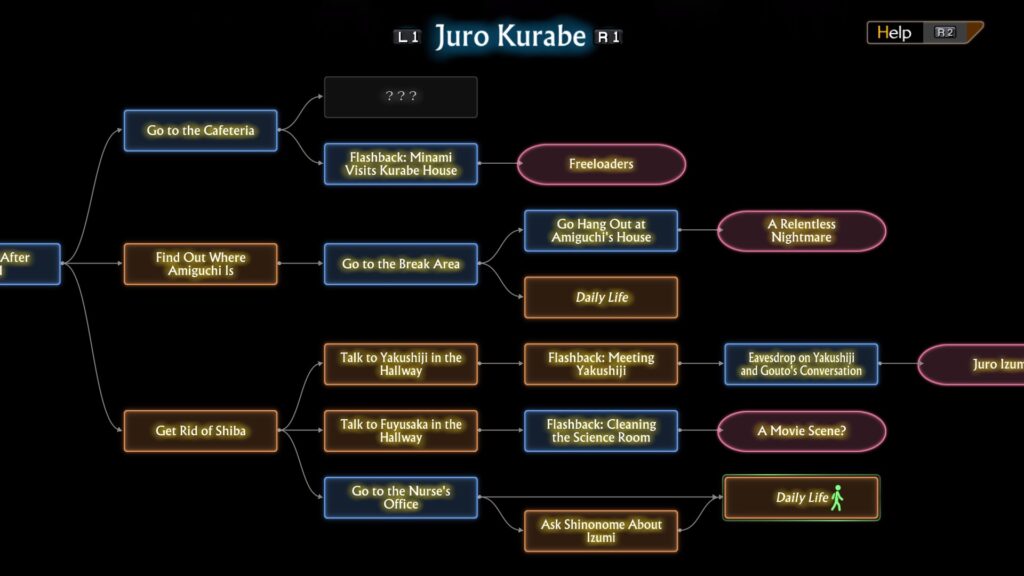 Missed Opportunity – What if discovering story nodes was a challenge? 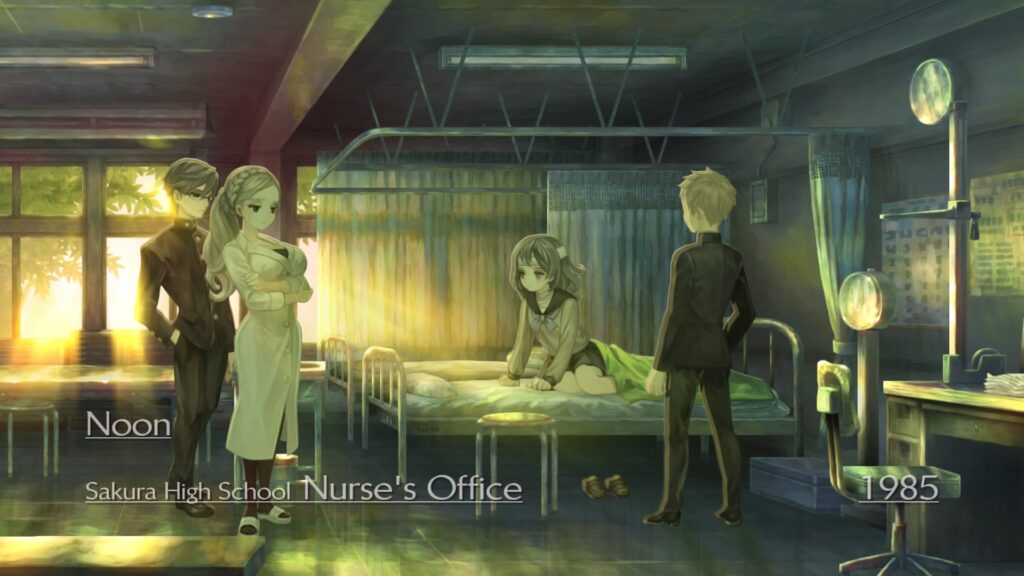 “Are you afraid that you will lose your identity if others leave you?” – Rei Ayanami

Glitches Experienced: None, thanks 13 Sentinels!

My Personal Reaction: Despite its handful of deep, glaring faults, 13 Sentinels: Aegis Rim is one of my favorite games in the past decade, somehow managing to strike an impressively creative note from mostly-derivative elements. (If you’re going to steal, steal from the best I guess). Better yet, it’s all deliberately executed.

When the story hits lulls in your personal interest (perhaps from over-long session binges) battle sequences are just the thing to help break that tedium. There is an addictiveness to the interminable madness of battle and the challenge is likely to outlast even the most stalwart of players. The brilliance of this overall design is how cathartic the direct interaction of eliminating swaths of enemies is (as if you’re some prototype Gundam in space) vs the indirect playstyle of the main game, which has its tolerance limits.

I had a blast and relished in finding secrets or rewatching favored scenes to fully absorb foreshadowing. While initially seeming to be a frappé of pop culture elements, the story remains surprisingly coherent and withheld a few surprises until the very end.

That’s what they call a “pro gamer move”.

Noob Tips: Get rid of character splash screens from the options area to save time. Complete the storyline to get your spare mystery points converted into expendable XP. Boost Neurolink to a level 2 so that a pilot can last three battles before overloading. Additionally, high levels in both the Score and Chip multipliers are shortcuts to leveling up. Never “recover” pilots, just do a low end mission to progress time. “R1” is helpful for speeding through previously-seen content. 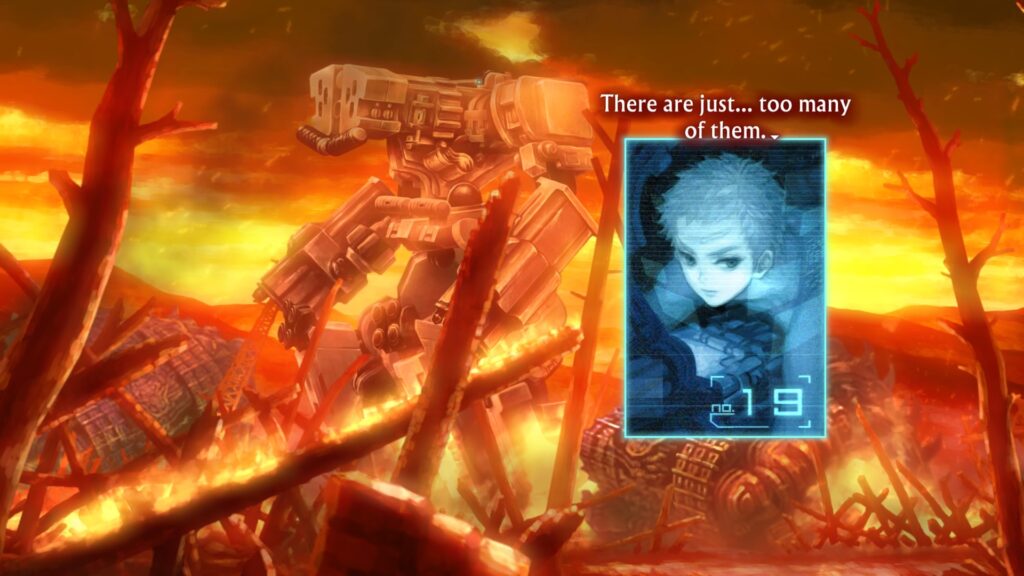 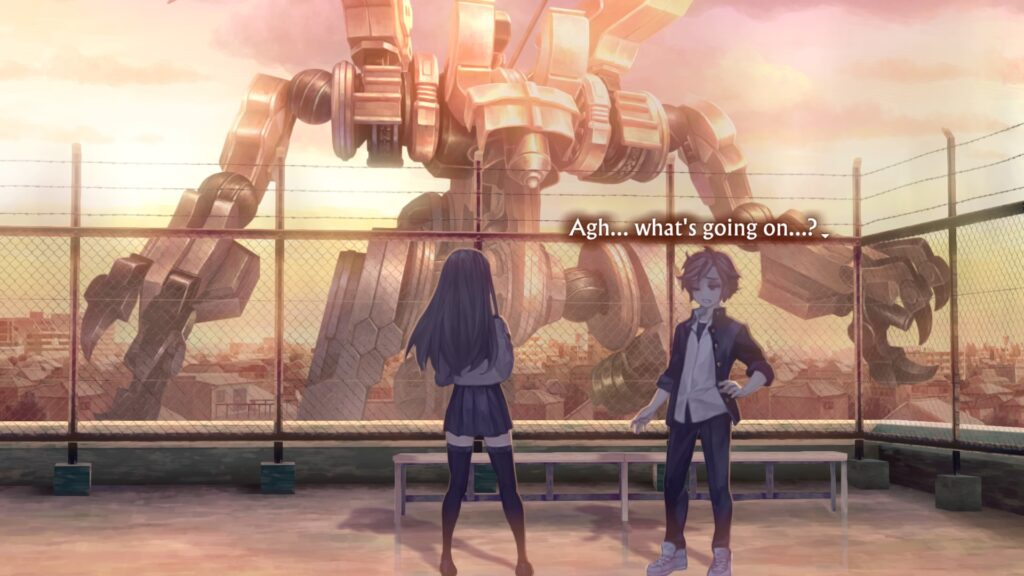 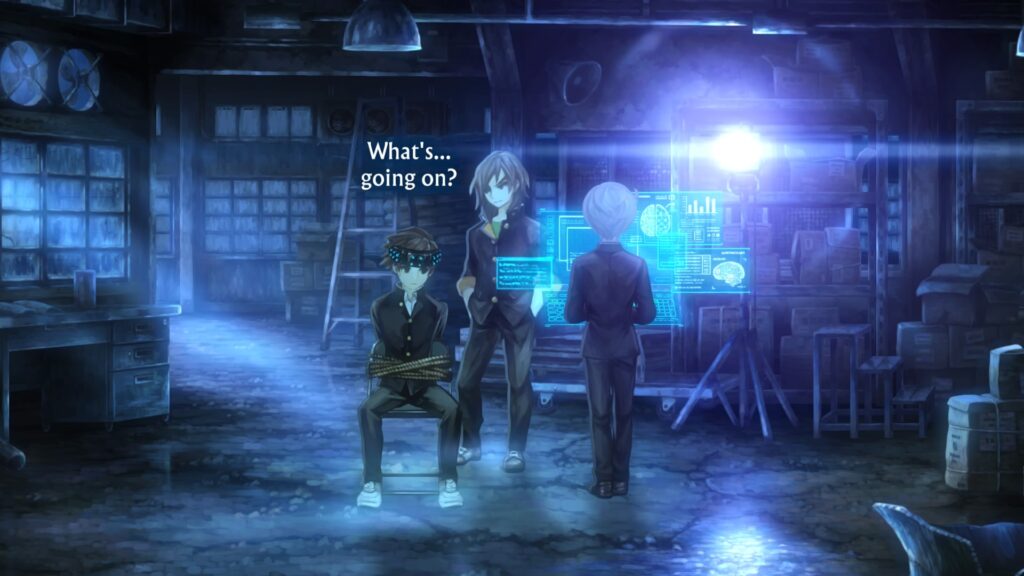 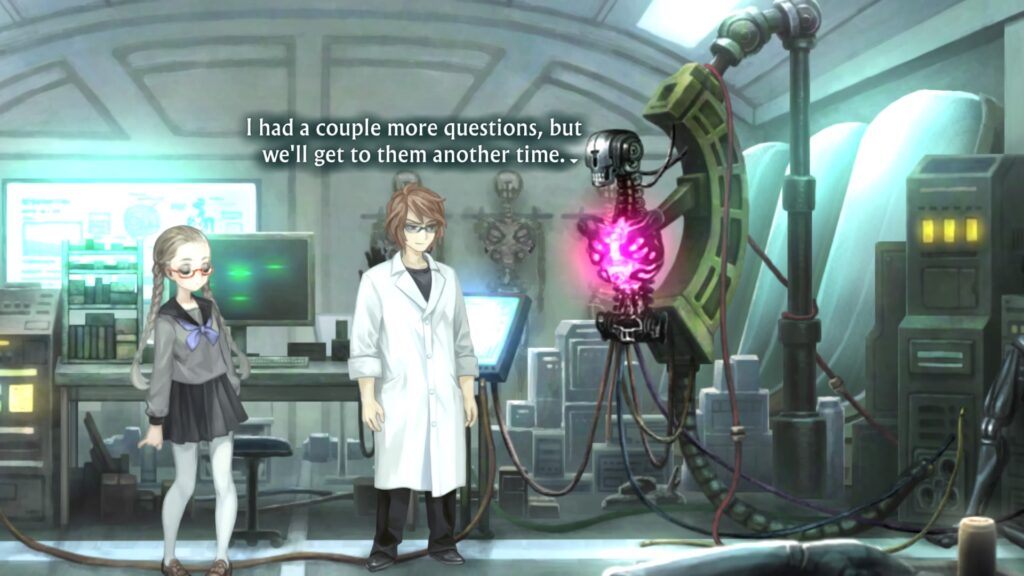